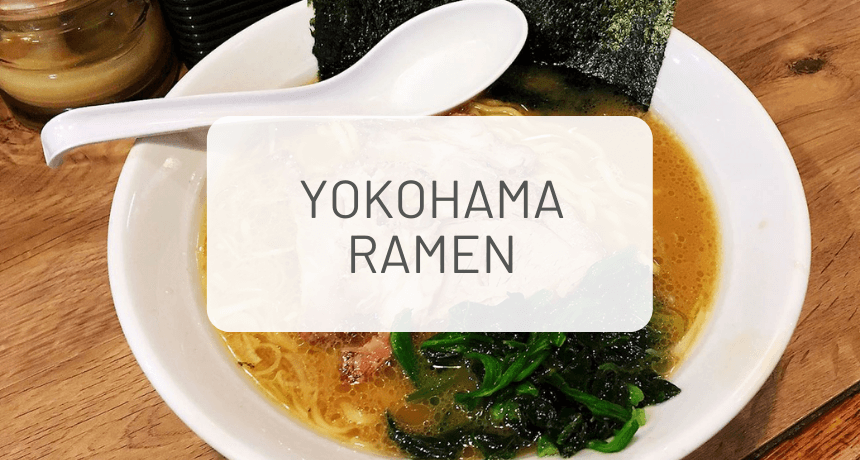 The Complete Guide to Yokohama Ramen

Yokohama style ramen dates all the way back to 1974, but has largely exploded in popularity over the years. While it shares the same broth base with the internationally acclaimed Hakata style ramen, Yokohama’s Iekei ramen mixes the meat-forward profile of tonkotsu with shoyu-- a flavor familiar to those who love the Tokyo style of ramen. Not only has this type of ramen persisted as a cult favorite among ramen enthusiasts, many disciples of the original ramen shop have created their own restaurants, further spreading the style across Japan.

Many say that Yokohama’s Iekei ramen is like a blend of two great ramen genres, the Hakata-style Tonkotsu and the Tokyo-style chicken shoyu. This is what makes this ramen type especially pleasing to a general crowd. Iekei ramen shops are all over the country, and are often packed with customers, whether they be ramen enthusiasts, or people going out to get a quick bite of “business ramen” to eat.

Let’s delve deeper into what makes the delicious flavor profile of Iekei ramen!

The Origin of Yokohama Ramen 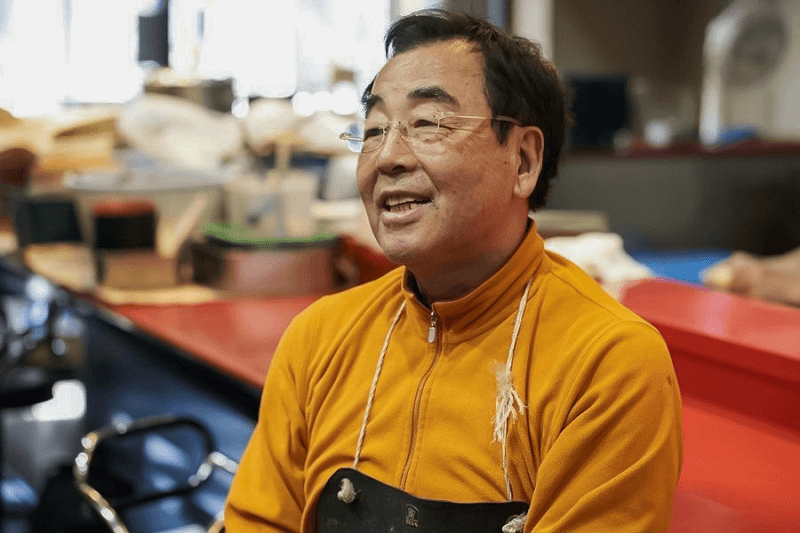 The current style of Yokohama ramen dates back to 1974, by former truck driver Yoshimura Minoru. As he travelled around the country by truck, he was exposed to different types of regional ramen, much like the varieties we’ve covered in our other ramen guides. After quitting his job as a truck driver, he ended up taking an apprenticeship at a well-known ramen chain called “Ramen Shop.” These are ramen-diner style chains that appear throughout the country, but the house specialty is one of the inspirations for Iekei ramen, a hearty tonkotsu-based broth. These diners were not only accessible in price range, but parts of the original inspiration still shine through in Yoshimura’s recipe and his own ramen shop.

After learning from his apprenticeship at Ramen Shop, Yoshimura opened his own ramen shop near Shin-Sugita station called Yoshimura-ya, where he combined both the meaty and rich flavor of Hakata-style tonkotsu with the clear and nostalgic taste of Tokyo Chicken Shoyu. He called this ramen “iekei,” which means “home-style,” or “family style.”

Yoshimura-ya ramen was opened by Yoshimura Minoru in 1974, where its unique blend of ramen broth was almost an instant hit.

Not only was this Iekei ramen an instant hit, but its blend of flavors was almost universally pleasing. The free toppings provided at the table are reminiscent of how service is done at Ramen Shop, but the unique flavor of the broth from blending the two styles is the first of many ramen fusions that sparked a trend in modern ramen culture.

Tonkotsu, or pork bone broth, is mixed with shoyu (しょう油, soy sauce) tare in order to create an especially rich soup. The soup base is made from boiled pork bones and chicken carcasses, afterwards the shoyu tare is mixed in. The broth also adds some chicken oil, so the soup has a distinct look to it that is different from most tonkotsu-based broths. While, for example, Hakata ramen looks very milky and creamy, it isn’t unusual to spot a small layer of chicken oil floating on top of the surface of Yokohama ramen. It is common to see restaurants offering extra orders of chicken oil, which add an extra depth of flavor to the broth.

The noodles of Yokohama ramen are also fairly distinct. The noodles are thick and flat, and, if you happen to be at the restaurant of a disciple of the Yoshimura-ya style, are produced only by an old-school noodle company called Sakai Seimen. In order to get Sakai Seimen to produce noodles for your shop, you need special permission from Yoshimura. These thicker noodles follow a special recipe that makes sure they don’t bloat up and soak up too much water while they’re being cooked.

Most iekei ramen is also cooked using a flat colander called a hirazaru  instead of a cylindrical colander. This tool is also used at locations that serve tsukemen, as it supposedly drains the water from the noodles very well while causing the least amount of damage to the noodles itself.

In terms of toppings, like most other ramen, the toppings are wholly customizable. The bowl usually contains spinach, dried seaweed, and chashu pork. At Yoshimura-ya itself, some toppings are provided for free at the table, while others can be added to your order to customize it. People enjoy adding other typical ramen toppings, such as eggs, kikurage, spring onions, and cabbage.

At Nakano Broadway, the shop Yokohama Iekei Ramen Nakano-ka, or “Yokohama Family Ramen,” specializes in Iekei ramen. While their menu offers over 15 different types of ramen, their signature dish is the Iekei ramen. For 650 JPY, you can get the most basic bowl of ramen, and still be able to add extra toppings to customize it to your taste. The ramen also comes with a bowl of rice, which can be refilled to your liking.

You can also choose the texture of the noodles and the amount of fat and oil in your soup stock. Yokohama Iekei Ramen Nakano-ka will always leave you either completely full, or craving for more. 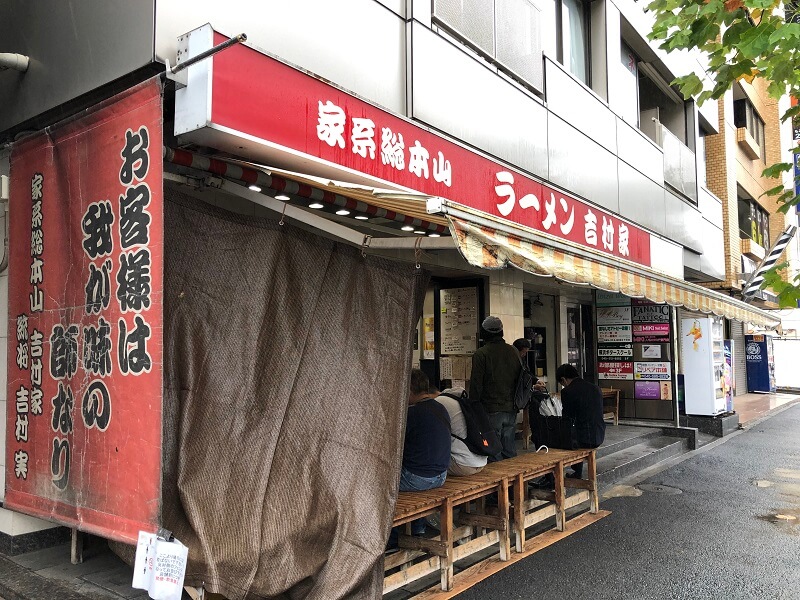 Our other recommendation to eat Iekei ramen is at its birthplace, Yoshimura-ya. While the wait times during peak times can snake around the street and be more than a 45-minute wait, the ramen itself is worth the wait. You have to place your initial order through a vending machine and are seated at a long counter, but when the staff come to take your order, you can customize it to your liking.

Customizations include richer or thicker soups, the firmness of your noodles, and the quantity of chicken oil on top of your ramen. No matter what you order, you are greeted with a delicious portion of the original Iekei style ramen, with boiled spinach, crispy nori, and chashu pork.

While Iekei ramen here may be much simpler than what modern ramen culture has evolved into today, the recipe is a piece of history.

It is hard to find a perfect instant ramen that encapsulates the exact restaurant flavors of iekei style ramen, however this does come close. The ramen broth, while not an exact replica to the thicker soups that you might find at a restaurant, does carry with it the essence of creamy tonkotsu and clear chicken-shoyu.

This instant ramen comes with a little piece of chashu (チャーシュー) pork as well as some nori. The oil packet is separated from the rest of the ramen so you can actually control how much chicken oil you want in your ramen as well. The noodles capture the taste of the broth very well, making for a very filling bowl of ramen in a single serving.

In 2019, Myojo, Yoshimuraya, and Lawson collaborated to make an instant ramen noodle that completely recreates the original Iekei Yoshimuraya signature dish. It comes with toasted nori sheets, chashu pork, and spinach. The soup base is separated into both a liquid and a powder, which you add to the noodles at the same time in order to get the perfect broth blend.

Using a darker soy sauce makes the taste somewhat deeper, but keeps the umami flavor of the broth from the pork extract and chicken oil. The noodles are quite soft though, but they mesh well with the flavor of the soup. You can also add different toppings to your ramen to dress it up a bit more.

Are you interested in starting your own ramen journey? Why not try out Zenpop’s Ramen pack, which features 7 full-size ramen of different types, including some of the styles we’ve outlined in our ramen articles. The themes change every month, so you can try all the different varieties of ramen all around Japan, including some limited edition options for the seasons!