It’s easy to find great stationery in Japan. One of the most common items you can find are mini memo pads. They are small and so great for to-do lists, leaving notes on the refrigerator, and writing tiny love letters. Cute mini memo pads come in all sorts of designs. You’ll see famous characters like Hello Kitty and Gudetama on the cover. But then you’ll see some wacky and cute designs that some creative artist brings to life from their imagination.

In our January Stationery Pack, we found four different designs of mini memos to include. Each pack got one of these mini memo pads to go inside, and we can’t decide which one is the best!

This is also a great opportunity to learn a few Japanese words and phrases so let’s take a look at these memos and see what we can learn. (We’re leaving out grammar explanations here so that’s why some parts are ignored.)

First up is Kitsuneko. As you can see the image is a fox wearing a cat for a hat. The word for fox in Japanese is "kitsune" and the word for cat is "neko." Kitsuneko is a portmanteau of these two words. Along the top of the memo you can see it says "Neko Kaburi No Kitsuneko". We already know "neko" means cat. In Japanese there are more words for wear than we have in English. In English we can wear shoes, pants, a shirt, a jacket, gloves, makeup, or a hat. Japanese has different verbs for almost all those! To wear something on your head is "kaburu". So "Neko Kaburi" literally means “to wear a cat on your head.”

That’s kind of silly right? But this is actually an expression that is used to describe someone who feigns innocence, or acts kinda stupid on purpose. Doesn’t the fox look so sweet and innocent wearing that cat? Well open the pages of the memo pad and you’ll see he’s actually quite naughty!

The inside page reads "Kitsuneko ha Honto ha Waruiko". "Honto" means true, and "waruiko" means naughty child. So this says something like "Kitsuneko is actually a naughty boy!" Look at him pulling the cat’s tail!

Next up is Kyushoku Time

Isn’t this one adorable. Putting tiny faces on food is like cheat mode for cuteness creation.

"Kyushoku" means school lunch in Japanese. In elementary and Junior high schools across the country, it is common for all the students to eat the same balanced lunch. Often times parents, and students are responsible for making the food as well. Even teachers will partake. Although it’s not uncommon to hear a teacher complain that they don’t want to eat the same amount of calories as a growing teenager.

Here’s a photo of a junior high school kyushoku: 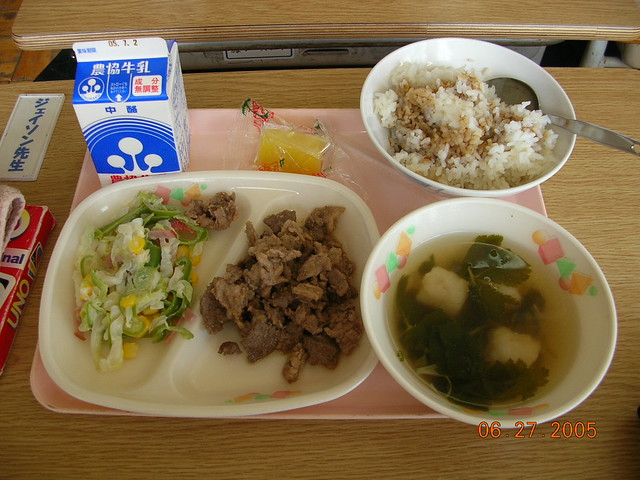 Just by looking at the design what do you think "hokkori" means? Deadpan? Tired? Hungry? The designs on the inside looks like some evil animal is stalking you through a window and with the captions below, it makes for an unintentionally creepy memo pad.

In fact, "Hokkori" means warm, or it can express the feeling of being relieved. So this memo is supposed to express warm feelings and affection. Do you think it’s successful? Either way, it is a cute piece of design.

But what’s the "koro" part of "tsunokoro"? Japanese has a plethora of onomatopoeia used to describe sounds, but also to describe actions, and feelings as well. "Korokoro" is used to express the sound of something rolling around. That’s why all these creatures look like they could just roll away.

Here’re a few more Japanese onomatopoeia for you to enjoy:

There are so many more, so take a look for yourself and enjoy finding some new Japanese words! What are the best Japanese Ballpoint Pens? What makes a drawing Kawaii?