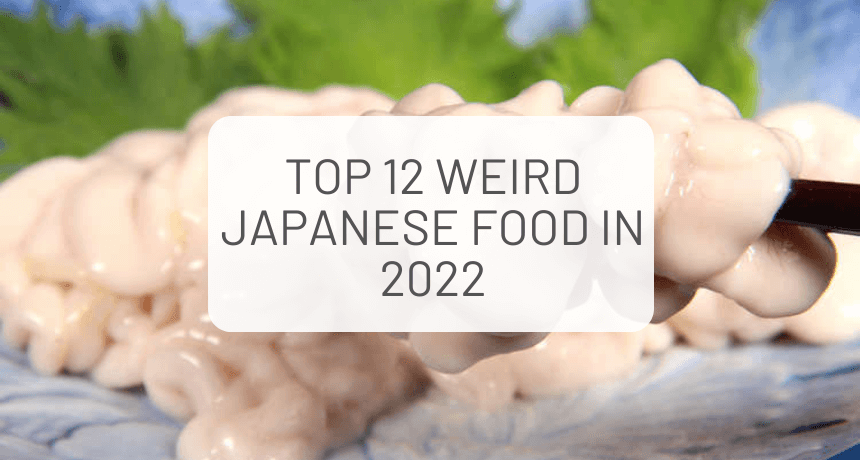 What Are the Weirdest Japanese Foods in 2022 ?

Japan has a lot of weird food, and it's hard to make a list of the weirdest, but we tried! This is our top 12 weirdest Japanese food. When you're outside the comfort of your own culture, everything else seems weird to you. Some meals are weird to you because of the differences in cultures, but others are just plain weird. The Japanese are quite popular for their creative and scrumptious meals, but they can get a little out of hand. What is the strangest food in Japan? What is the grossest Japanese food? Keep reading below to find your answers.

You’d be surprised at what can be put together to form the weirdest combinations of all time. Let's take a look at the top twelve weird Japanese foods and what they are made from. 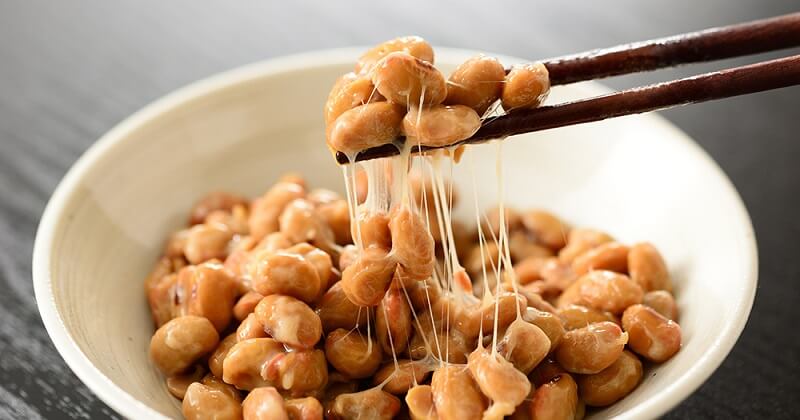 Imagine gooey, slimy, sticky, and well, smelly all rolled into one, in a bowl of food. That is Natto for you. Don’t cringe. Natto is a popular food in Japan but even some Japanese people would not eat it. What's interesting is that it's one of the healthiest foods in Japan.
It is made from fermented soybeans, which are then thoroughly mixed with some soy sauce and Japanese mustard until the dish is gooey. What's weird about Natto is how the texture and strong smell is off-putting, but it is still a standard breakfast meal that can be eaten with rice or even ramen. 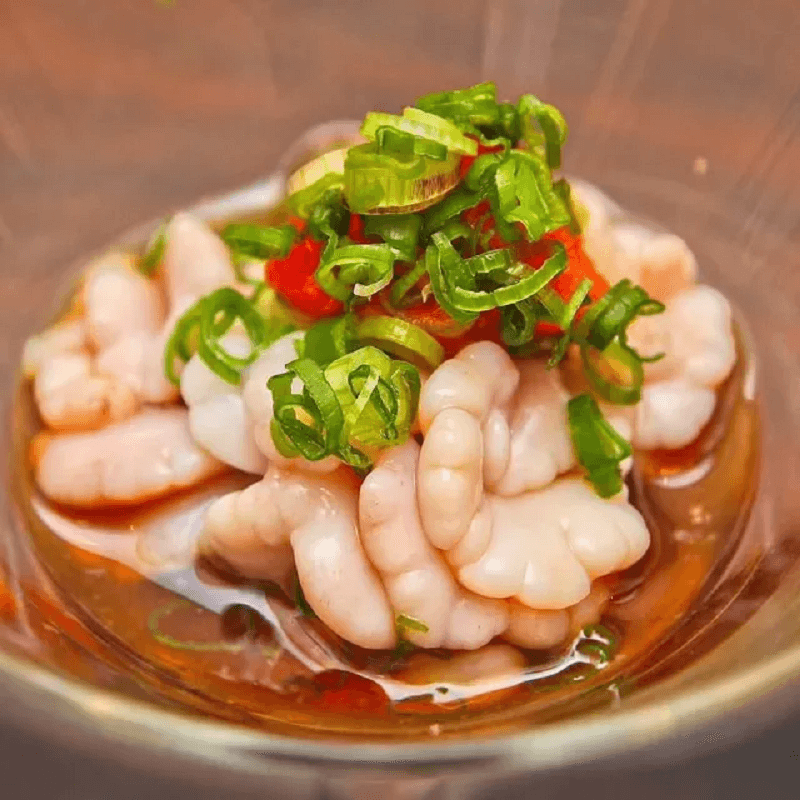 Shirako may look like a bow of brains, but it's actually the sperm sac of fish. I mean, even though it sounds gross, you would be surprised to know that it can be expensive in Japan. It has a buttery or custard-like taste and you may fall in love with it if you don't know that it's a sperm sac. It can be eaten alone or used as toppings in other dishes. 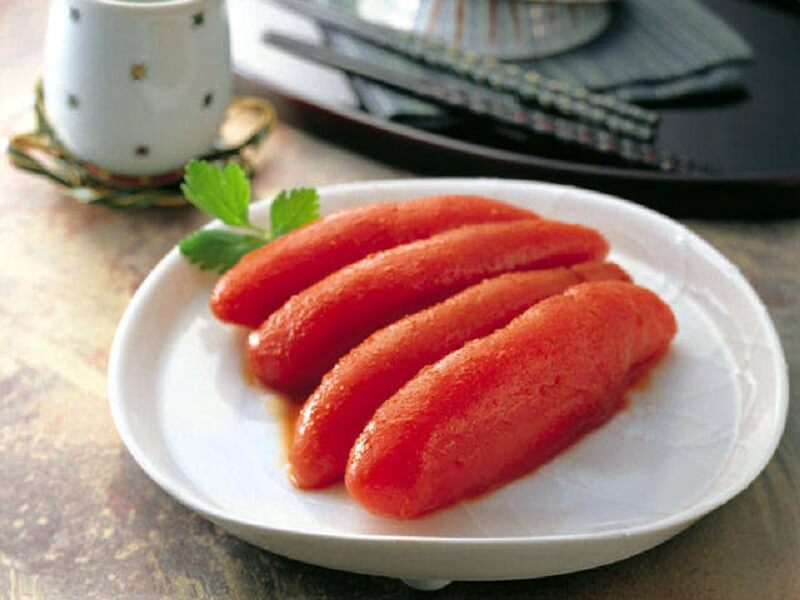 This is also known as Pollock Roe in English. Tarako or Mentaiko (Spicy version) is one of the many types of egg-cellent Japanese delights. It is basically a sac of Cod Roe eggs that can be used in many dishes like rice, onigiri, and pasta. Without spices, it's pretty salty but when it is spiced, it has a strong taste. Just one sac can be used to serve three people depending on what dish it is used for. The delicate skin membrane holds the eggs together so when you dig in, it just pops in your mouth, and then you're chewing lots of tiny eggs. In fact, the flavor is so good that you can see Mentaiko flavored potato chips and even Mentaiko chicken nuggets. 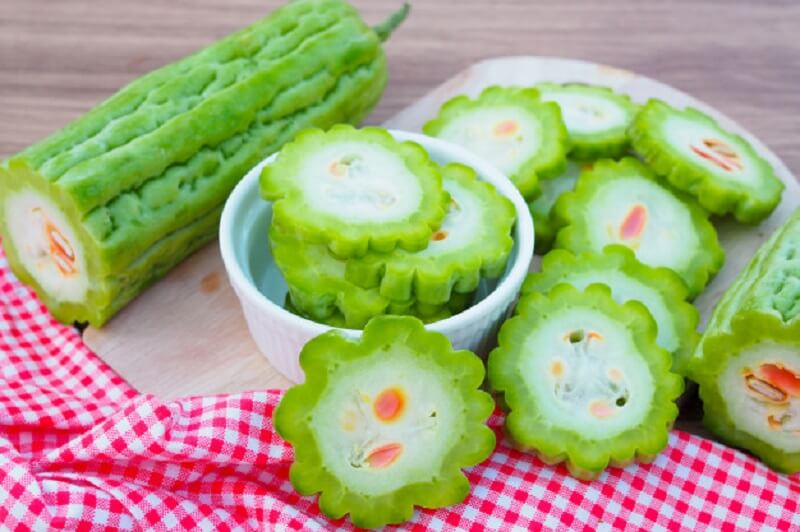 Goya is a bitter gourd or bitter melon. As a vegetable that usually grows in Okinawa, it is popular in that district. What's weird about it is that it's quite bitter, but its health benefits are very attractive. But the benefits of Goya exceed the taste. Goya can aid in weight loss, improve the immune system and even rejuvenates the skin and hair. This is not just heresy, these benefits are backed by several studies and research. Do you think you can withstand the bitter taste to enjoy some of the health benefits? You can add Goya to soups, stir-fry and eat with meat or make Goya tempura. 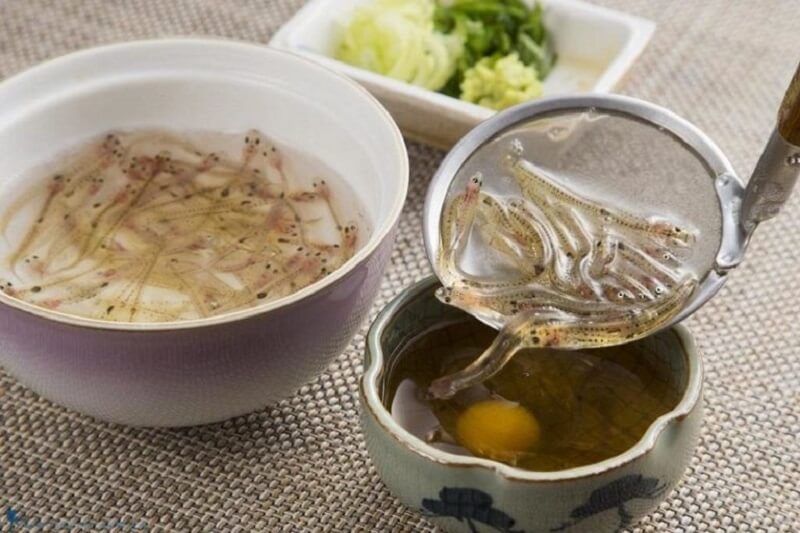 Just looking at this dish will make you squirm. These small, transparent fish are eaten raw in Japan. The interesting part of this dish is the dancing the fish does when it's in your mouth. Shirouo no odorigui literally means dancing fish in English. It is usually dropped in a cup of vinegar which makes the fish dance even more. This dish is only available when the Shirouo fish is in season in spring, so it's pretty special. 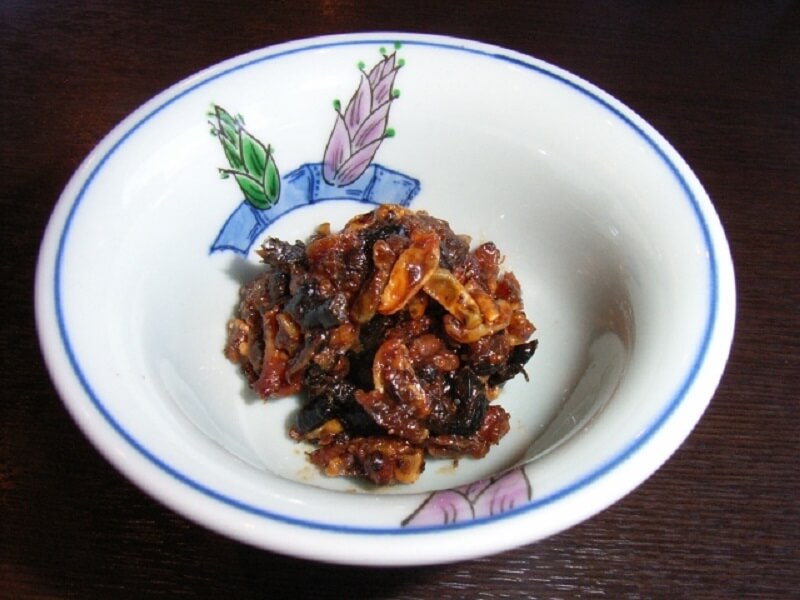 Usually, we stay away from bees, right? Well, this bee larvae dish brings you super close to bees. Hachinoko is an old Japanese meal that was popular in mountainous areas where there was little access to fish. It can be prepared with sugar and soy sauce and then served with rice. At least, you can't deny that it is very proteinous. 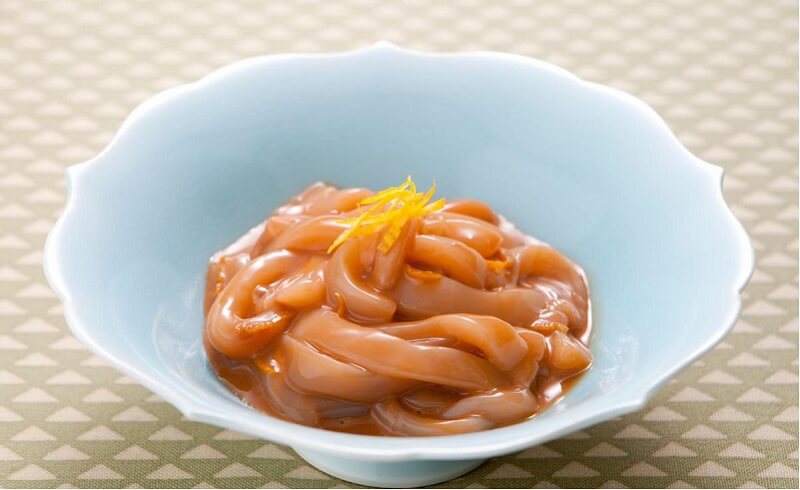 After seeing Natto, it's pretty obvious that fermented food is welcomed in Japan. Shiokara is made by fermenting sea animals like squid, salmon, and crab in their viscera and salting it. It has a fishy and salty taste, but the texture is quite slimy so not everyone will be a fan of it. On the bright side, shiokara is quite nutritious and can be taken as a side dish with alcohol. 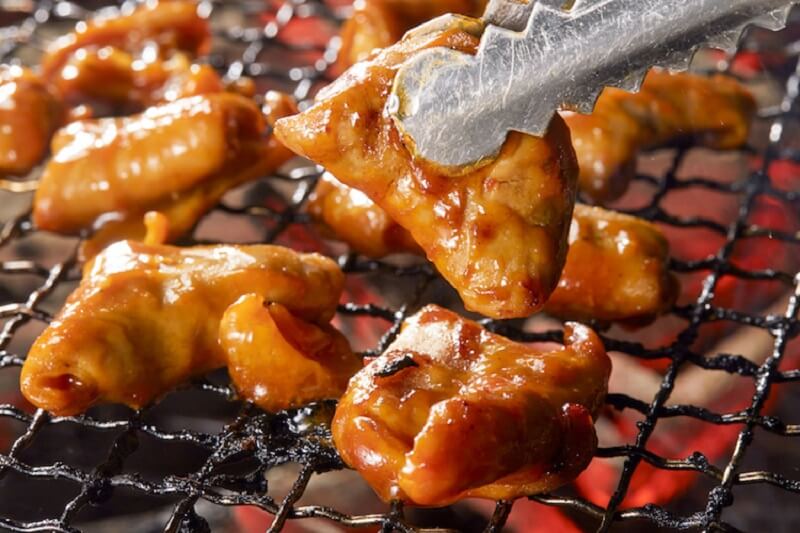 Horumon is made with pigs and cow guts or intestines. Usually, we throw these parts away, but the horumon dish among the Japanese is more of a “throw in” rather than something you throw away. It is pretty popular in Osaka and is usually barbecued with other meats and served hot. You can also boil it in a hot pot with other vegetables and meat. It's not as weird as the other dishes, it's quite chewy. 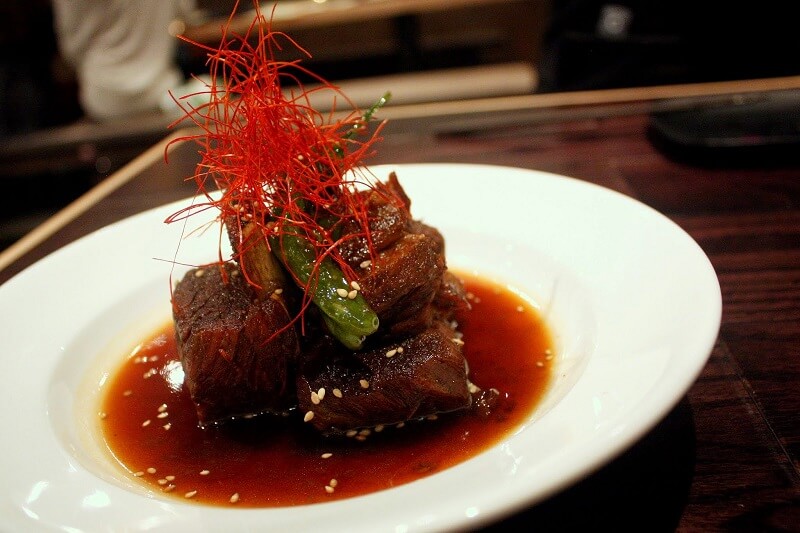 Whale meat in Japan used to be a big part of Japanese cuisine, but it is currently a specialty meal available in few restaurants. The meat is chewy, thicker than the average fish meat, with a salty taste. The slightly grilled version of it might sound more appealing to you and is said to melt in your mouth. Whale meat is high in protein, and it can also be eaten as whale sashimi and boiled too. 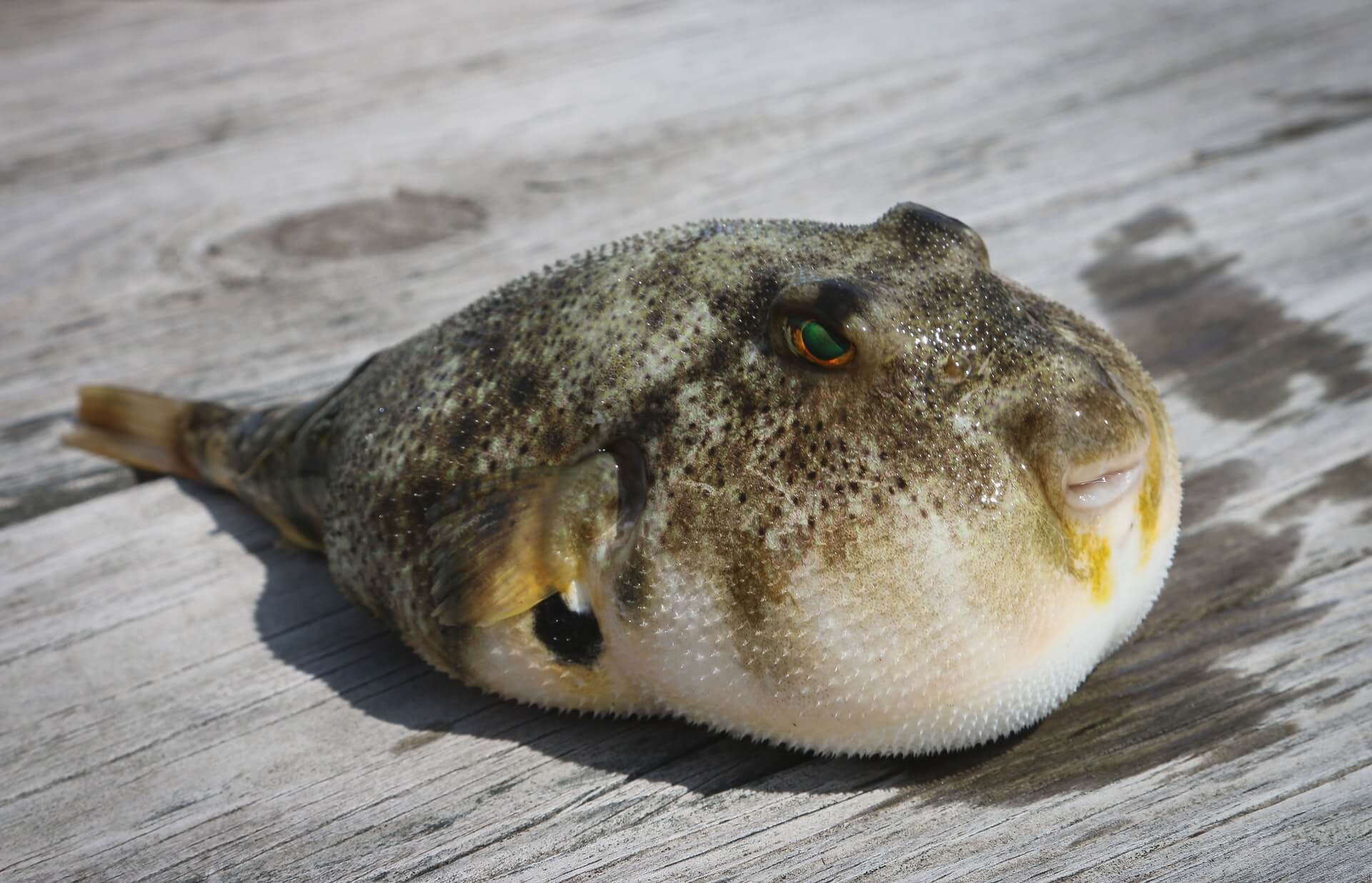 Why is eating a fish weird, you ask? Well, the pufferfish is so dangerous that it causes paralysis and even death because it contains toxins. Luckily, the poisonous parts of the fish are organs like the eyes, liver, and even testes or ovaries. Fugu is one of the most expensive and most sought-after foods in Japan because preparing it is hard work. A chef must have earned a license to cut up and serve people the dish. Even with several regulations set up, some fishermen have actually died trying to prepare pufferfish by themselves. It's a deadly meal but that's what makes it interesting. Don't worry, you're in safe hands when you eat Fugu in a Japanese restaurant. 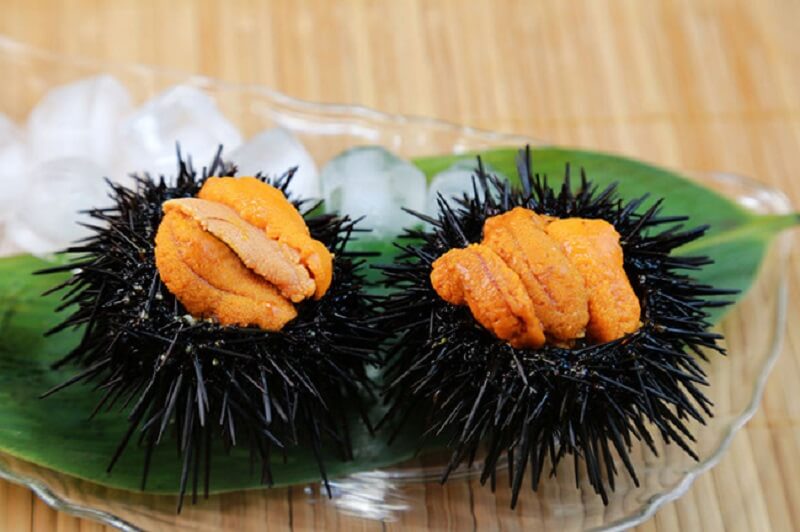 A sea urchin is a sea creature with big and sharp spines. Before you ask what part of the spiky creature you would be savoring, well… the edible part of the uni is its reproductive glands. Because each sea urchin contains just five of these glands, it's high luxury food in Japan. It can be eaten raw or cooked with so many dishes like pasta, sushi, rice and seafood hot pot. It has a very sticky, buttery, and a strong sea-like taste. The uni is so loved in Japan that there's a Uni festival held in some places when the harvest begins. 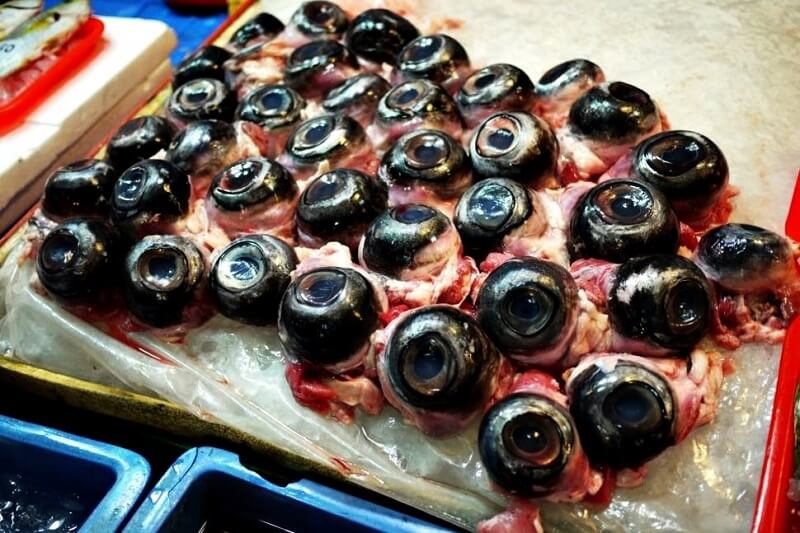 Tuna eyeballs are golf ball-sized casual snacks served in pubs and restaurants in Japan. They are popular, so you can buy them cheaply in grocery stores in Japan. Chefs usually boil these eyeballs and sauté them with sauce and other ingredients. The exterior is a bit chewy so some people suck the soft innards and chew the exterior.

While these dishes might sound or look weird to you, some people enjoy them. There are commercialized versions of some weird Japanese meals like Natto. If you're lucky enough, you can get some from our ZenPop monthly packs, but you'll have to visit the land of the rising sun to try out most of these weird yummy delicacies yourself.