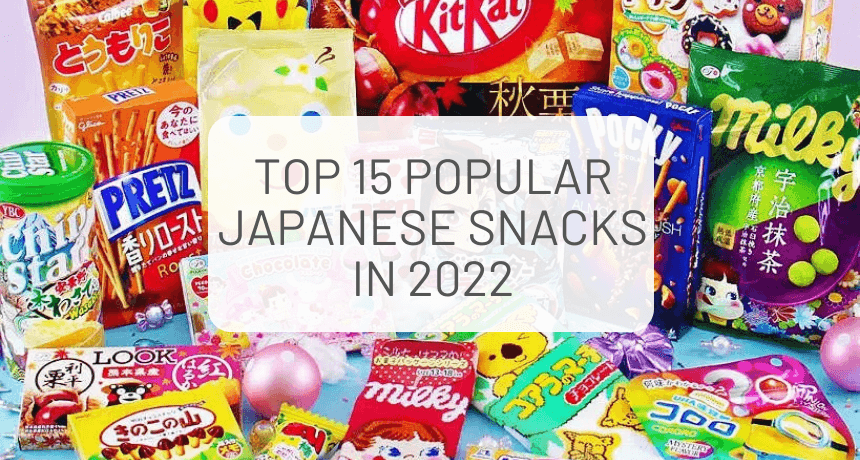 Japanese snacks have a history of being extremely rich in flavors, they also come in different varieties. There are tons of Japanese snacks to satisfy one’s cravings in any situation. It’s almost hard to decide what to Indulge in.

As far back as the Edo period, a Japanese traditional snack called ichimon gashi was eaten by low-class people. Samurais even traveled with snacks to sustain them throughout the journey. For a long time, Japan has been producing some of the most interesting snacks. In fact, over 100 new snacks are said to be created yearly.

With all of these innovations, there are tons of snacks in Japan, but only a few remain widely popular after being in existence for a long time. We make it our goal at ZenPop to bring a taste of Japan to people all over the world. If you haven’t yet had the chance to try traditional Japanese snacks, keep reading to learn about them.

It’s pretty difficult to limit the sheer number of these snacks to just 15, but we will discuss some of the yummiest snacks that would get your mouth watering. 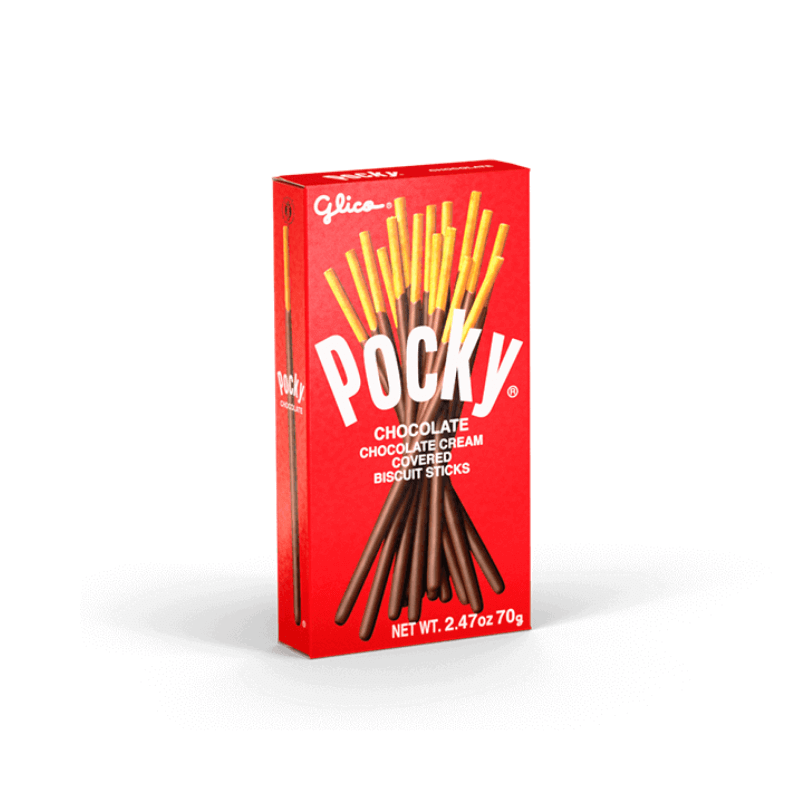 This is basically biscuit sticks coated in chocolate that were invented in 1966. It can either be thin or extra thick coating, but it is always very rich. Even though chocolate is the most popular coating, there are other varieties like almond crush, strawberry, vanilla, and even green tea cream flavored coating. Another great invention is the GIANT POCKY which is larger than the usual size with more cream coating of course. 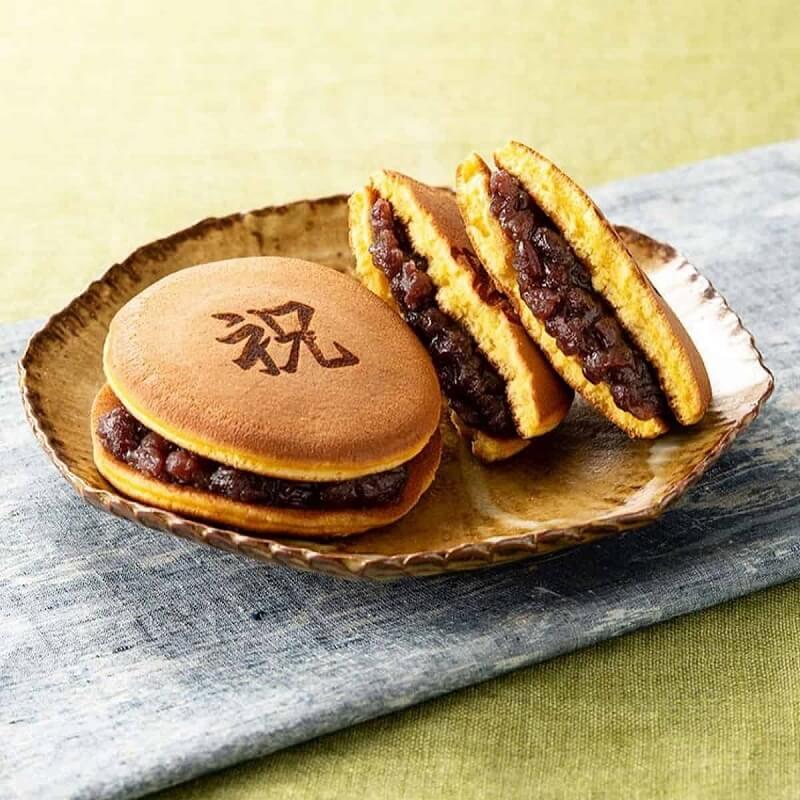 Dorayaki is a popular Japanese snack consisting of two small sweet pancakes held together by thick red bean paste known as Anko in the middle. It has a sweet taste but there’s also that hint of legume from the bean paste. You can also use toppings like chocolate spread or whipped cream. 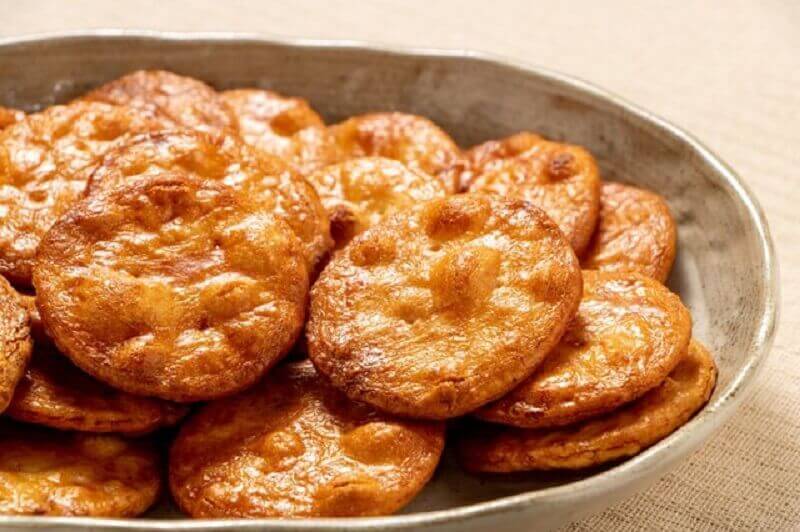 This is a Japanese snack that is centuries old; it has been made since the Edo period. Senbei is toasted rice crackers that can be taken with beverages. While originally, it was only flavored with soy sauce and salt, now Senbei can be seaweed, salad, or even potato flavored! It is sold on street food stalls but its commercial version has various flavors, shapes, and sizes. 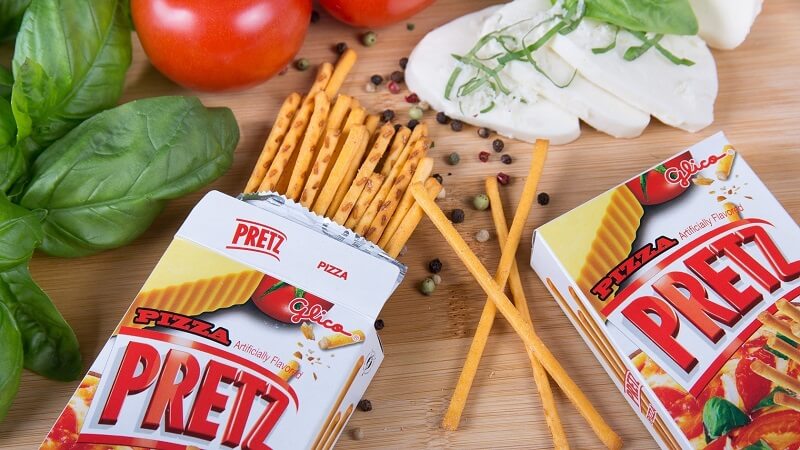 Pretz is a popular snack in Japan that has been around since 1963. It is often compared to Pocky, but it is dusted in flavor seasonings instead of dipped in cream. It has its appeal because each flavor is so unique, there is the tomato, spicy shrimp, pizza cheese, roast, and even smoked bacon flavor of Pretz. The empowering aroma of each seasoning makes it an absolute hit. 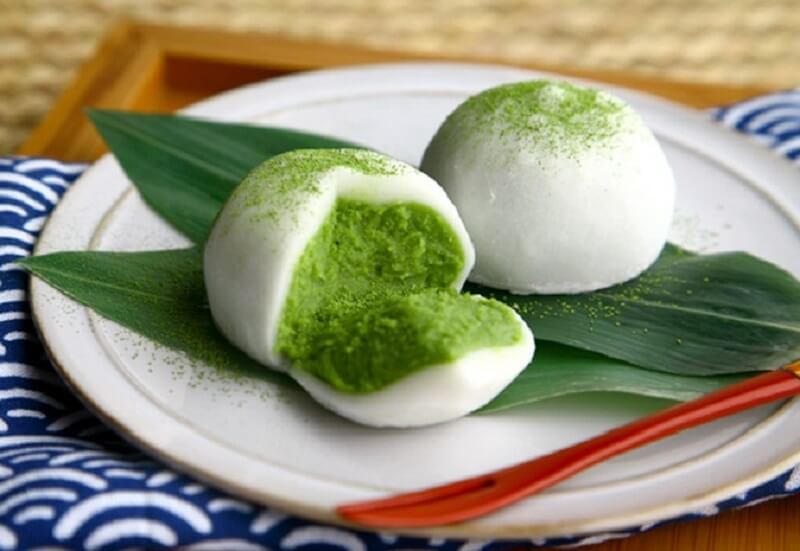 Mochi is a classic Japanese snack that is made with pounded rice. Sometimes, a ceremony is held when making Mochi. It has a sweet taste but is also soft, stretchy and chewy. It’s kind of like a gummy bun. This snack is also sold in other countries because it can be made in different flavors and colors. There’s even Mochi ice cream with ice cream filling. It’s such a fun snack with a savory taste. 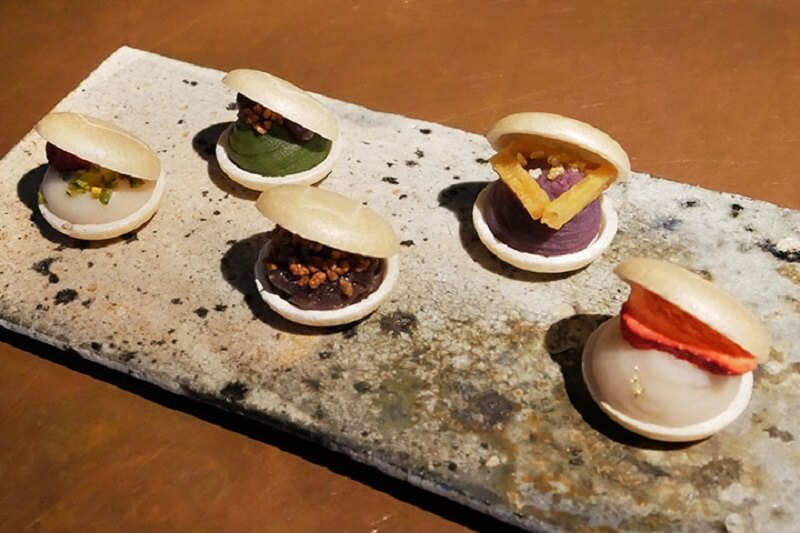 Monaka also makes use of the Japanese red bean paste but this time, it is crammed inside two mochi wafers. It has a thicker helping of Anko because the wafers are thin. It is also very interesting because it brings together the chewiness of mochi and the strong taste of Anko. With other types of fillings like ice cream, chocolate, or chestnut, it’s hard not to get drawn to monaka. 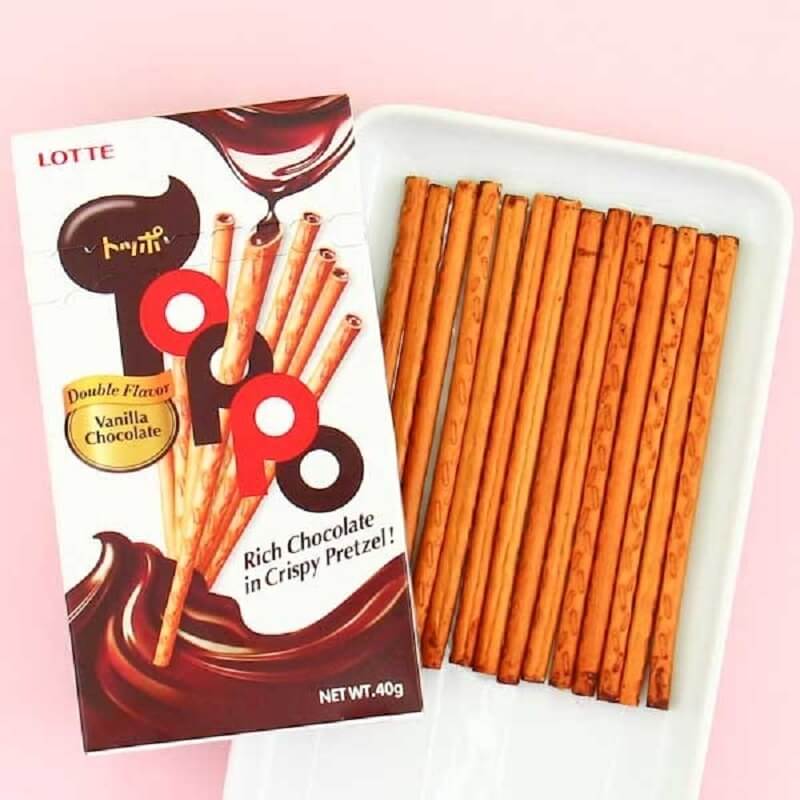 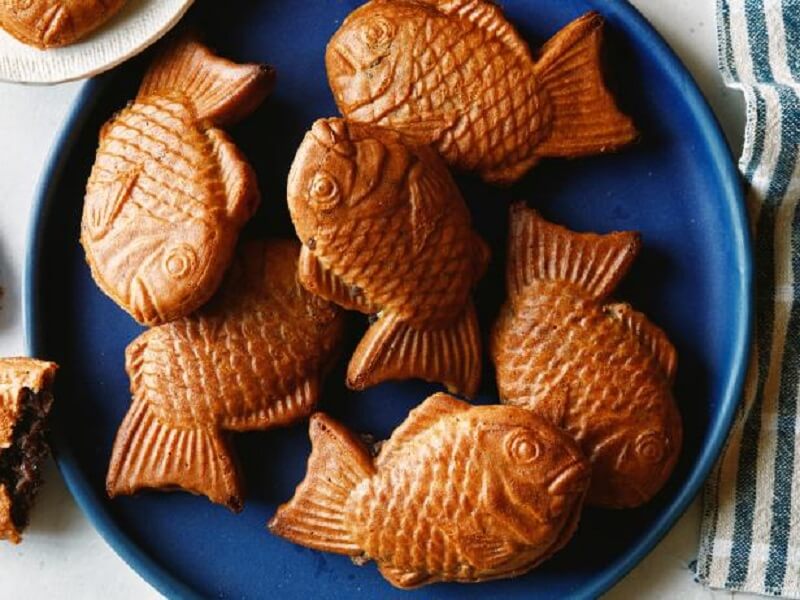 While dorayaki has the bean paste inside it, Taiyaki is kind of similar in that aspect. It is a sweet cake with a distinct fish shape. Although usually sold in the streets, it can now be bought from supermarkets in packs with different fillings like sweet potato, cheese, black sesame seed and of course chocolate. The texture and taste have been compared to waffles because it is also made using a fish-shaped mold. When it is fresh, it has a crispy texture around the edges which is just heavenly to taste. 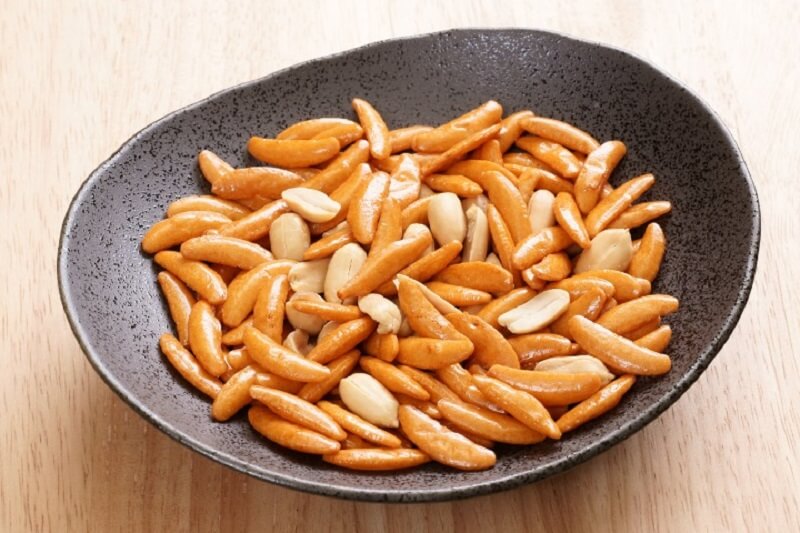 If you love the idea of Senbei or rice crackers then Kaki-pi is definitely for you. It is a mixture of soy-flavored crescent-shaped rice crackers and peanuts. With the crunch and nuts, you get a healthy burst of flavors that’ll keep you feeling full between meals. It can be coated with seasonings like wasabi or chili as well to give that extra punch. 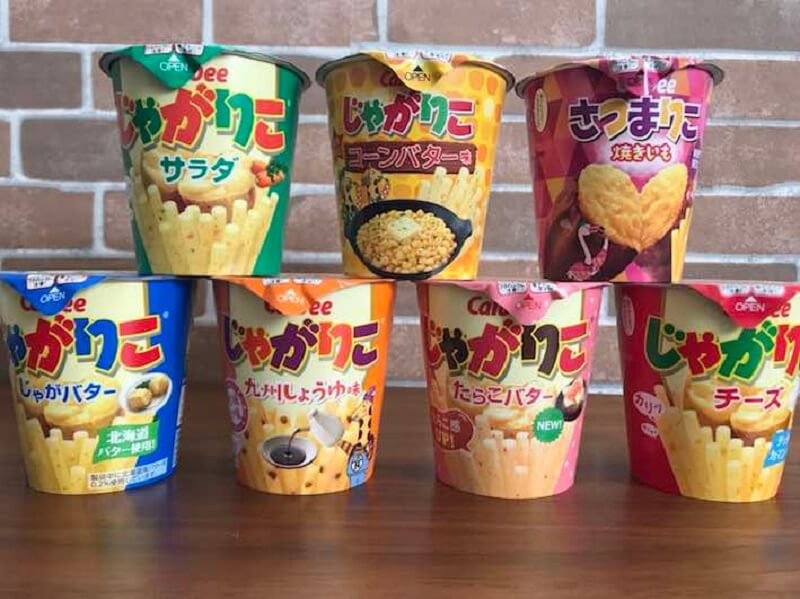 Okay, let’s go back to stick-shaped snacks. Have you always wanted to have fries on the go, but haven’t been able to? Jagariko is the answer to this. It is a crunchy potato stick that comes in butter, salad, and cheese flavor created by Calbee. It has a soft-core so it doesn’t only taste like fries, it tastes like chips too.

This chocolate-coated mushroom-looking candy is made by Meiji in Japan. It is a biscuit that looks like a mushroom but the top is coated with thick rich chocolate while the stem is bare. It comes in flavors like chocolate, strawberry, and sweet potato.

12. Takenoko no Sato (たけのこの里, village of the bamboo shoots) 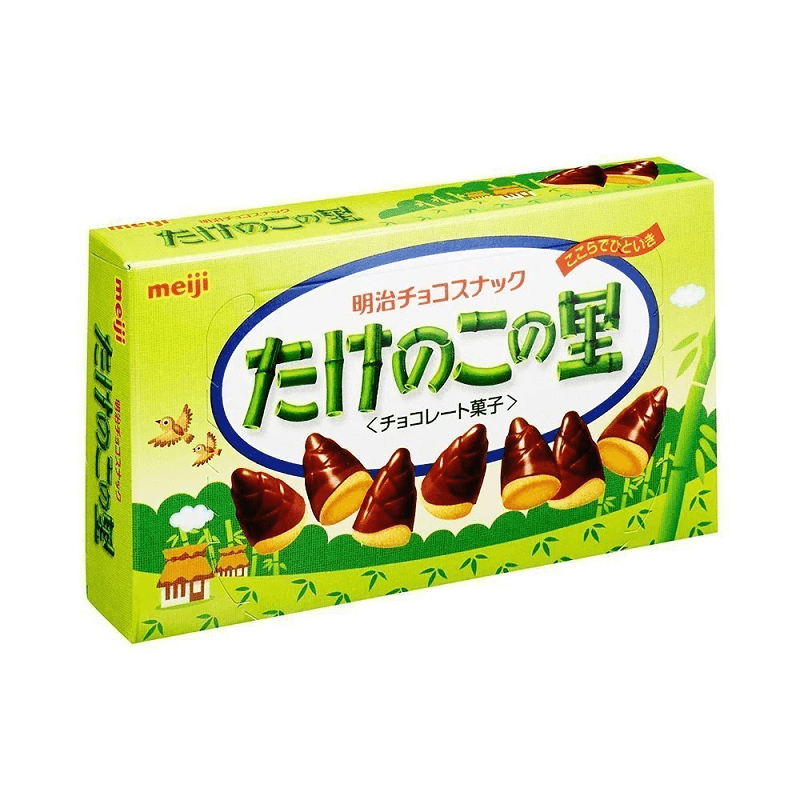 Another great product by Meiji and eternal rival of the previously mentioned Kinoko no Yama is the Takenoko no Sato, which is similar but has a bamboo shoot cone shape. You can’t take the biscuit part and chocolate part separately like you can with the Kinoko no Yama but it is exquisite too. 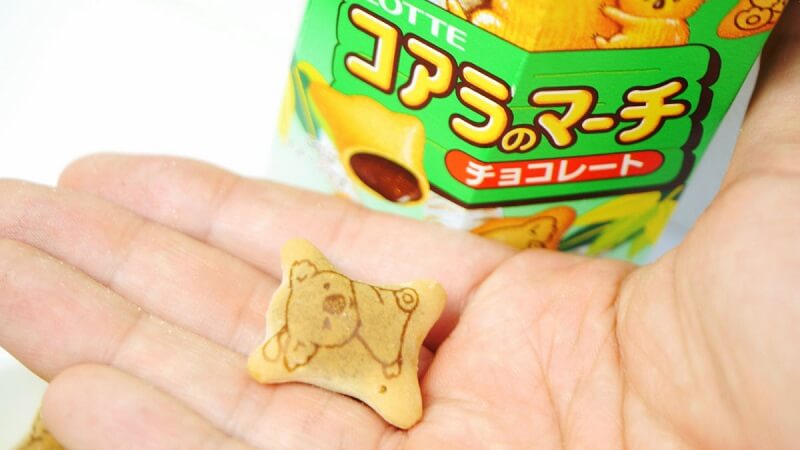 Koala’s March is an adorable biscuit snack by Lotte with cute koalas’ designs imprinted on them. As if that’s not cool enough, it has cream filling and each Koala imprint is different. The filling can be anything from chocolate, vanilla, strawberry, honey, or banana. 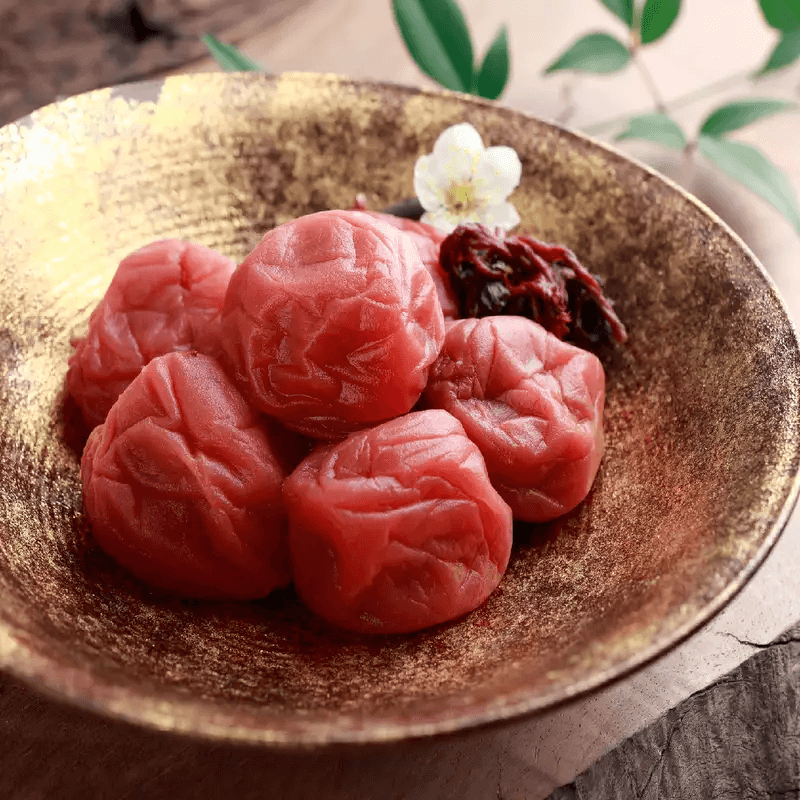 Japan is known for a lot of sweet snacks, but they also dabble in healthy ones. Dried plums are popularly sold in packs after being salted and dried for some days. Because of its sweet, juicy and sour taste, it can be addictive. Different brands selling are dried pickled plums and they each have their unique spin to bring out the best flavors. 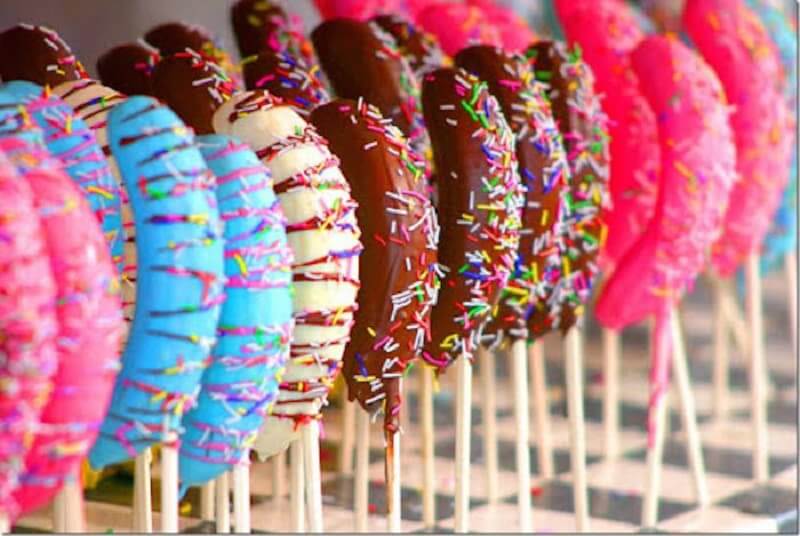 You can probably guess the ingredients of this snack by the name. Skewered bananas dipped in creamy chocolate and finished with candy toppings like chocolate drip, sprinkles or glaze. This is usually sold in festivals as a street snack but Meiji has created a candy version inspired by this snack. Meiji’s choco banana is shaped like a banana too and it is very tasty.

Overall, Japanese snacks are definitely top-tier level. You can just feel the dedication of manufacturers because they come up with new ideas and flavors every day. Even though some of these snacks are street food, they have also been commercialized in packs. You, too, can get a taste of these yummy delights with just a click. Check out our ZenPop snack pack to get the best snacks Japan has to offer.