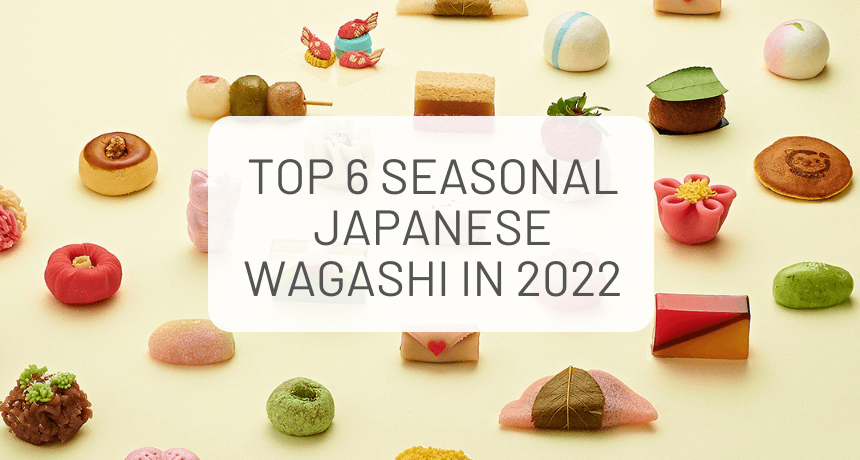 When you think about the nicest things that the land of the rising sun has to offer, what quickly comes to mind are the traditional Japanese snacks. Locally known as wagashi (和菓子), these confections are typically served with green tea. Of course, they can still be enjoyed as standalone treats. 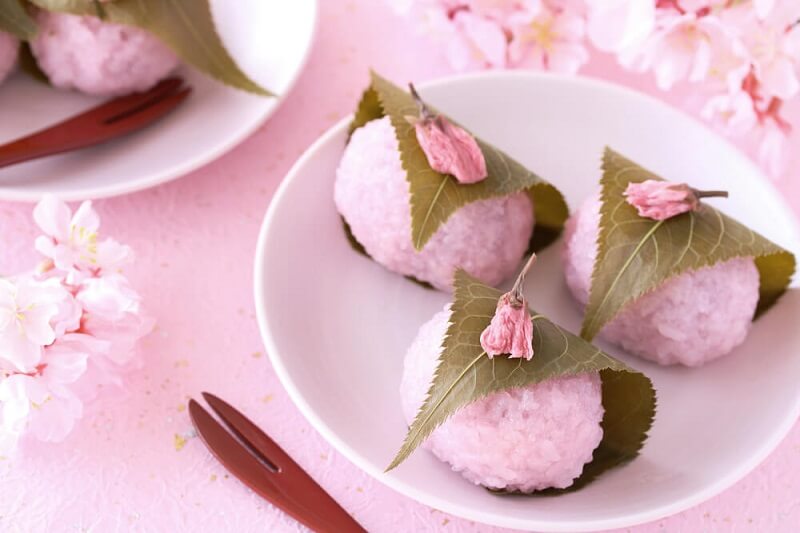 What could be more quintessentially Japanese than a cherry blossom-flavored mochi? Sakura mochi is a traditional Japanese snack that is typically made during spring. It is commonly eaten in celebration of girls’ day or Hinamatsuri, a holiday wherein families pray for their young daughters’ success, health, and happiness.

There are two kinds of sakura mochi. The Kanto Region (where Tokyo is) serves Chomeji while the Kansai Area (where Kyoto and Osaka are) has Domyoji. The former is a crepe-style snack made of flour while the latter uses glutinous rice. What’s common between the two types is that they’re wrapped in a salted cherry blossom leaf and filled with Anko (red bean paste).

The leaf isn’t just wrapped for aesthetic purposes. It is salted and is actually edible. Depending on their preferences, people can either eat or remove it. When you do choose to eat the salted leaf, you’ll be treated to a balanced flavor wherein the saltiness emphasizes the sweetness of the red bean paste.

The leaf also preserves the overall quality of the sakura mochi. It prevents the mochi from drying out and keeps the dust at bay. Finally, the leaf adds the aroma of cherry blossom.

Minazuki is a type of traditional Japanese snack that is made in the month of June. The word minazuki can be literally translated to “without water” because June is typically associated with drought.
The said confection is made with uiro (a mochi-like steamed cake) topped with azuki beans. You’ll typically see it being sold on the 30th of June in Kyoto, where shrines hold an event called Nagoshi no Harae. It is a day for cleansing the impurities during the first half of the year and praying for good health in the latter half. The triangular shape of the bottom cake is a representation of ice. On the other hand, it is believed that the red beans atop have an evil-dispelling effect.

Back in the old days, the emperor of Japan would eat ice topped with azuki beans during the summer. Ice was a luxury at the time. So the commoners thought of making something equivalent, which eventually became this traditional Japanese snack called minazuki.

If you’re looking for a refreshing summer snack, then kuzumochi is the perfect treat for you. It is a type of mochi that is made from kuzuko (arrowroot powder) and water. The result is a translucent jelly-like cake that has a chewy texture.

Kuzumochi is a popular summer snack in Japan because of its cooling effect. It is believed to help people perspire less and keep their body temperature low. The snack is also perfect for those who are on a diet because it is very low in calories.

Kuzumochi is often served chilled with brown sugar syrup and kinako (roasted soybean powder). The former gives the mochi a slightly sweet taste while the latter adds a nutty flavor. You can also find kuzumochi being sold in convenience stores and supermarkets.

Among those creations is Amanogawa (literally means Milky Way). It is one rare yokan (traditional Japanese sweets made of red bean paste, agar, and sugar) sold by Shichijo Kanshun-do in Kyoto.

The Amanogawa isn’t just a tasty sweet treat. It’s so visually appealing that it won the internet. The beautiful confection is only available during the summer season and is especially popular during the Tanabata festival.

At the top is a jelly featuring a gradient of colors representing the Milky Way. It is designed with stars that seem to twinkle. Then at the bottom is the red bean paste. You have to slice this yokan to appreciate its elegance even more. It is best eaten cooled and has a delicate taste reminiscent of the star-crossed lovers, Orihime and Hikoboshi. 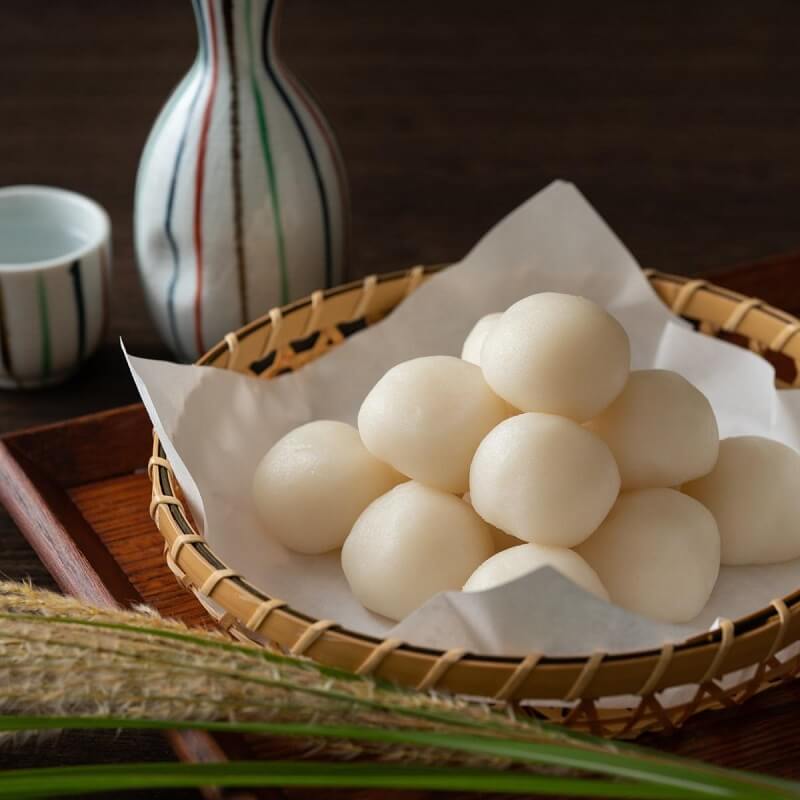 Tsukimi dango is a type of mochi that is traditionally eaten during the Tsukimi festival. The said event is celebrated on the 15th day of the 8th month of the lunar calendar. It is also known as the moon-viewing festival or harvest moon festival.

The festival honors the goddess of the moon, Tsukuyomi. The dango is said to resemble her shape and is offered as an act of respect. Tsukimi dango can come in various shapes and sizes. But the most popular type is the pearl-shaped dango.

The dough for tsukimi dango is made with glutinous rice flour, sugar, and water. It is then molded into a ball and steamed. The balls are served in a set of 15 pieces and pyramid arrangement.

Health-conscious eaters will find the kusamochi an ideal snack. It is a type of mochi that is made with mugwort (草). The mugwort gives the rice cake a slightly bitter taste. It is often served as an accompaniment to tea or enjoyed as a snack. Kusamochi is believed to have detoxifying properties and is said to help improve digestion. It is also thought to be a good source of dietary fiber.

The rice cake is made by grinding glutinous rice flour, sugar, and mugwort together. The mixture is then steamed and formed into a cake.  The cake is then wrapped in mugwort leaves and tied with straw.
Kusamochi can be found in most Japanese supermarkets and convenience stores. It is often sold pre-packaged and is a popular snack during the spring months.

Why are traditional snacks often paired with tea?

There are a few reasons why traditional snacks are often paired with tea. First, tea is a refreshing beverage that can help to cleanse the palate. This is especially important after eating a rich or heavy snack.
Second, the antioxidants in tea can help to offset some of the potential negative health effects of snacks that are high in fat or sugar.

Third, the caffeine in tea can help to boost metabolism and energy levels. This can be helpful when trying to stay active while snacking. Finally, tea is a social drink that can be enjoyed with friends or family. This makes it the perfect accompaniment to snacks that are meant to be shared.

Reasons to Try Out These Traditional Japanese Seasonal Snacks

All of Japan’s seasonal snacks are made with fresh, high-quality ingredients, and they are carefully crafted to highlight the unique flavors of each season. Whether you’re a fan of sweet or savory snacks, you’re sure to find something to your taste.

In Japan, each season has its own distinct flavors, colors, and aromas. Why not try yourself at a Japanese snack box from ZenPop? Discover the taste of Japan delivered to your doorstep!