The Complete Guide to Japanese Oden (with recipe)

Oden (おでん), a classic winter dish in Japan that brings warmth to your soul. Oden is a one-pot type of dish that comes with an assortment of fish balls, fish cakes, deep-fried tofu, hard-boiled eggs, konnyaku, and some vegetables simmered in soy sauce-based dashi broth. The food has to simmer for a long time. You can even let it cook for a day.

You can often find Oden sold from food carts, even though some izakayas and several convenience store chains also serve it from October to April. Of course, there are also dedicated restaurants. Many of these restaurants keep their broth as a master stock, replenishing it as it simmers to let the flavor deepen and develop over many months and years. 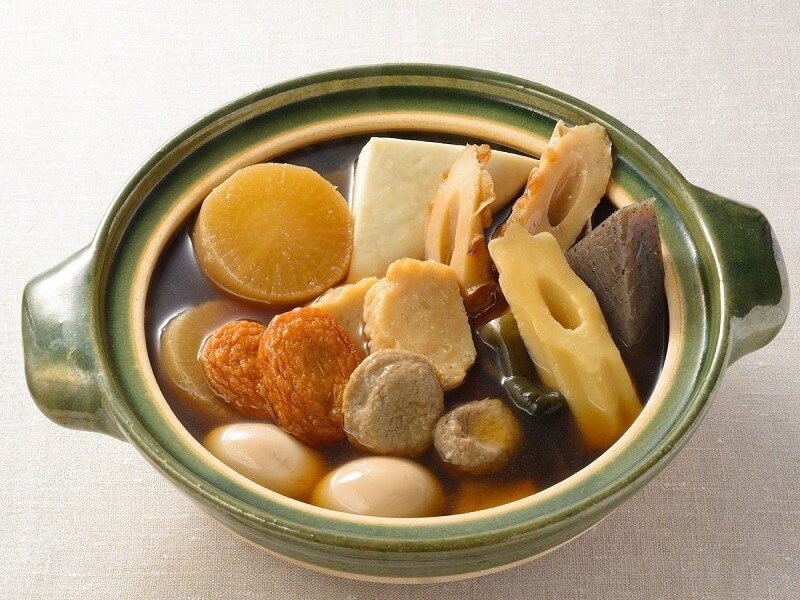 Oden (おでん, 御田) is a type of nabemono (鍋物, Japanese one-pot dishes), prepared with a series of ingredients such as boiled eggs, daikon, konjac, and processed fishcakes stewed in a light, soy-flavored dashi broth.

It is a little different from stew or hot pot. You can think of it more as a simmered dish; assorted fish balls, fish cakes, atsuage (厚揚げ, deep-fried tofu), hard-boiled eggs, konnyaku, and some vegetables are simmered in soy sauce-based broth for hours.

It may not look appetizing at first glance, but once you eat it, you’ll want to add this to your list of winter comfort favorites. There are no official rules, and basically, you can use all kind of ingredients to simmer in your soy-flavored hot broth.

Oden aficionados enjoy the subtle flavors of a long-simmered broth and the contrasting textures and flavors of the diverse fish cakes, especially when paired with sake or beer.

What does the word oden mean? 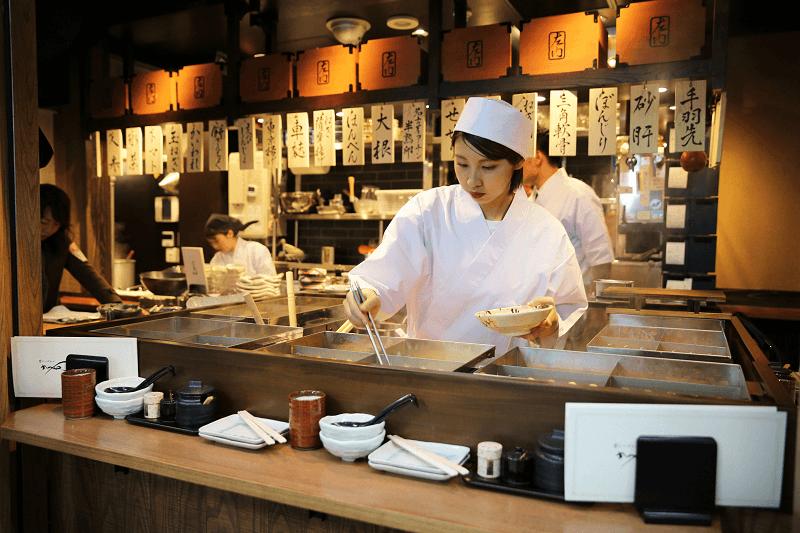 The dish wasn’t always what it is today. Originally, Oden was called misodengaku (味噌田楽),  or just dengaku. It was a very simple dish where konjac (こんにゃく, konnyaku) or tofu was boiled and eaten with miso (味噌).

It is only much later that miso was replaced by dashi (だし), and that the dish became more popular. Ingredients vary according to region and between each household. Karashi is often used as a condiment. 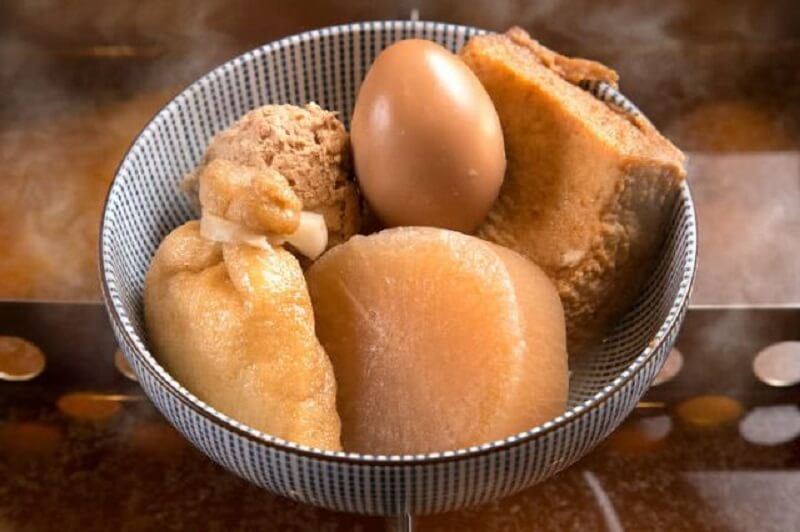 Oden not only is delicious, but it is also very healthy and nearly fat-free! You can eat it with shirataki (白滝, a type of noodles), which help digestion, calcium absorption, decreasing cholesterol, and preventing high blood pressure!

Of course, the recipe is flexible, and every region in Japan has its version of the dish. That’s a great excuse to travel around the country and explore the nuances in this hot-pot dish.

What are regional variations of oden? 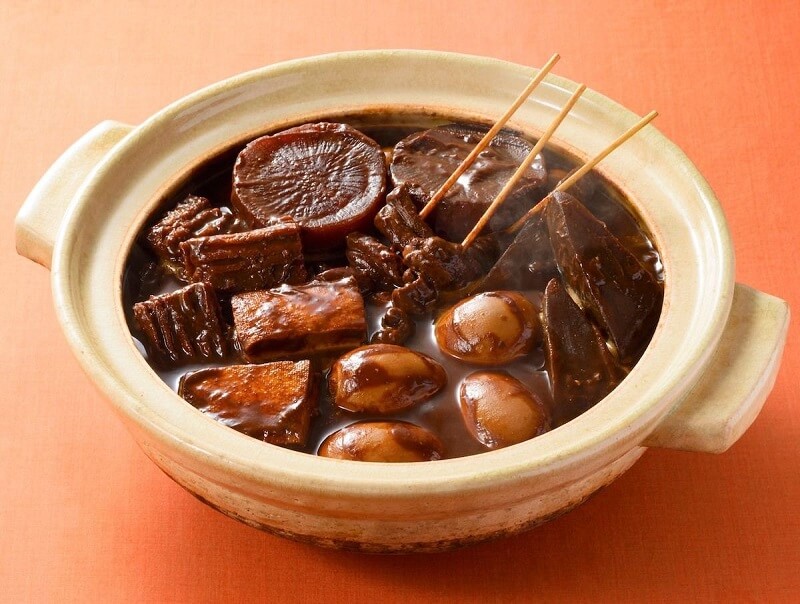 Nagoya, the city famous for having witnessed the birth of Toyota, the world’s largest car manufacturer, is also known for its oden. In Nagoya, the dish is usually called Kantō-ni (関東煮) and they use soy sauce as a dipping sauce. Miso oden is simmered in Hatchomiso (八丁味噌) broth, which tastes lightly sweet. They have reverted to the origins of the dish, and the most common ingredients are konjac and tofu. 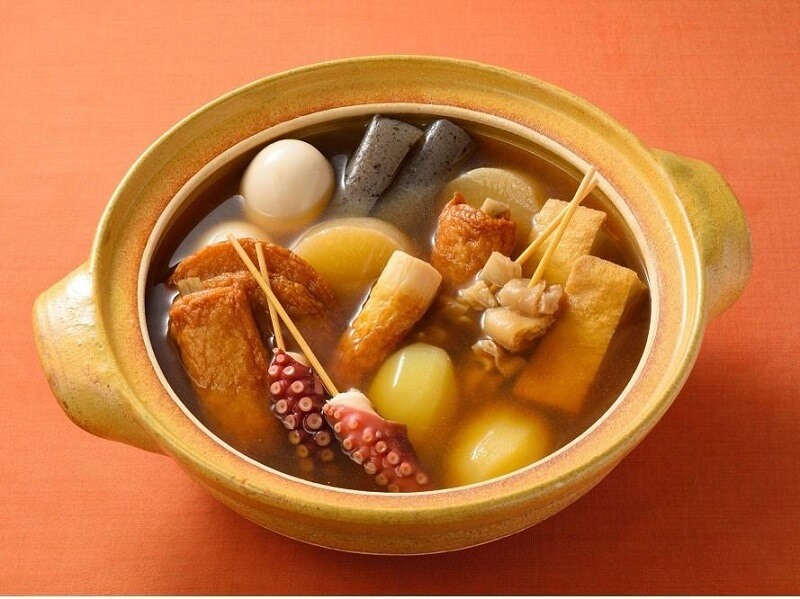 In the Kansai area, around Osaka, the same dish is oftentimes referred to as Kanto-daki (関東炊き) and has stronger flavors compared to the Kantō version. 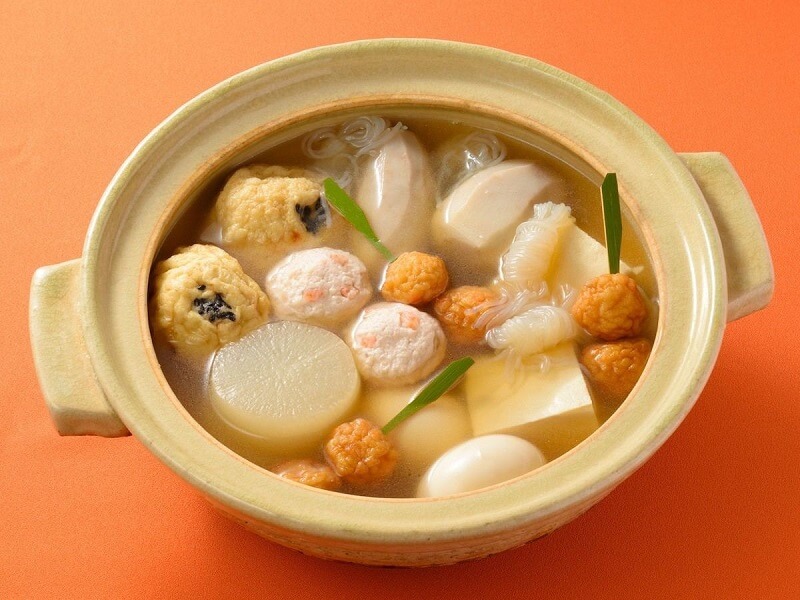 Staying in the same region: Kyoto oden. Kyoto-style oden is made from kelp and light soy sauce soup, and is characterized by a light color that is slightly seasoned with tofu and Kyoto vegetables. 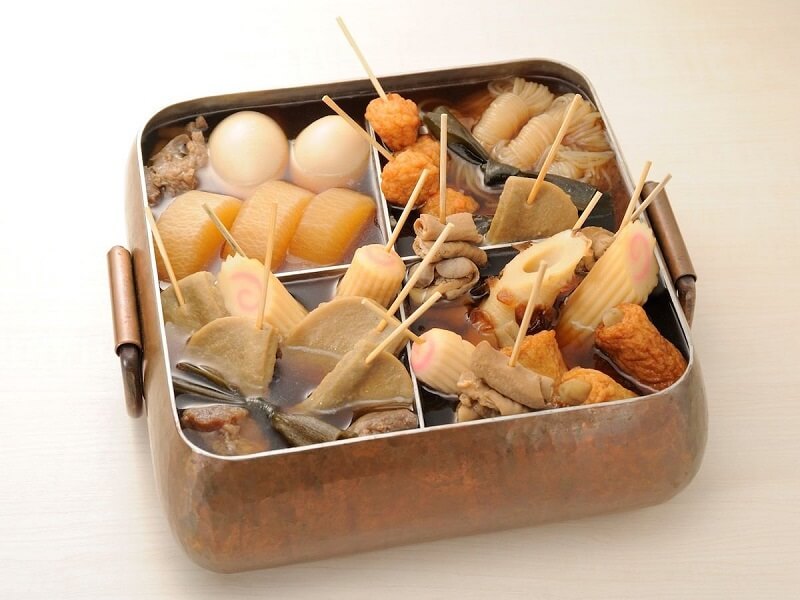 Now, another city, Shizuoka, famous for the Formula 1 Grand Prix and beautiful views of Mount Fuji, Oden comes with a dark-colored broth, flavored with beef stock and dark soy sauce. All the ingredients are skewered. Usually, they will also sprinkly dried and ground fish (sardine, mackerel, or katsuobushi) as well as aonori powder before eating. 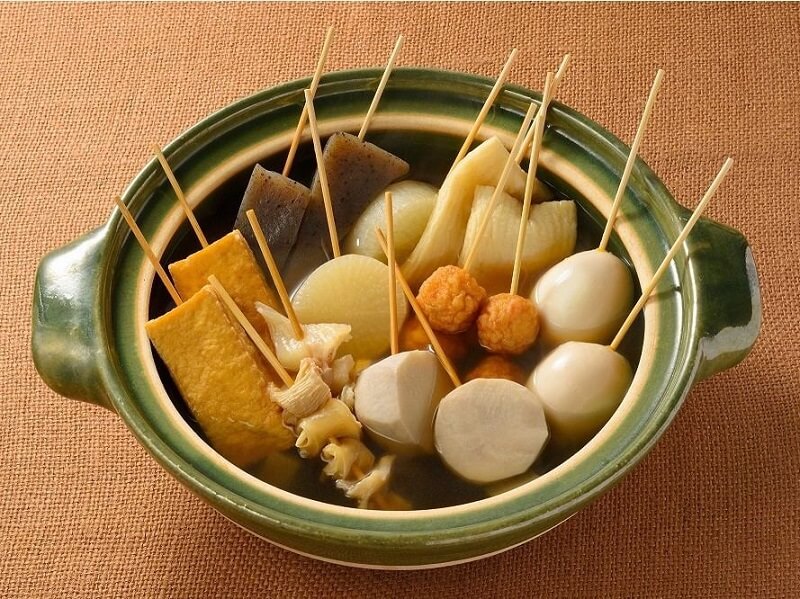 A prefecture famous for Udon (うどん), Kagawa, on the beautiful island of Shikoku, has the tradition of serving Oden as a side dish. They’ll typically eat it with miso while waiting for a main course of udon noodles. 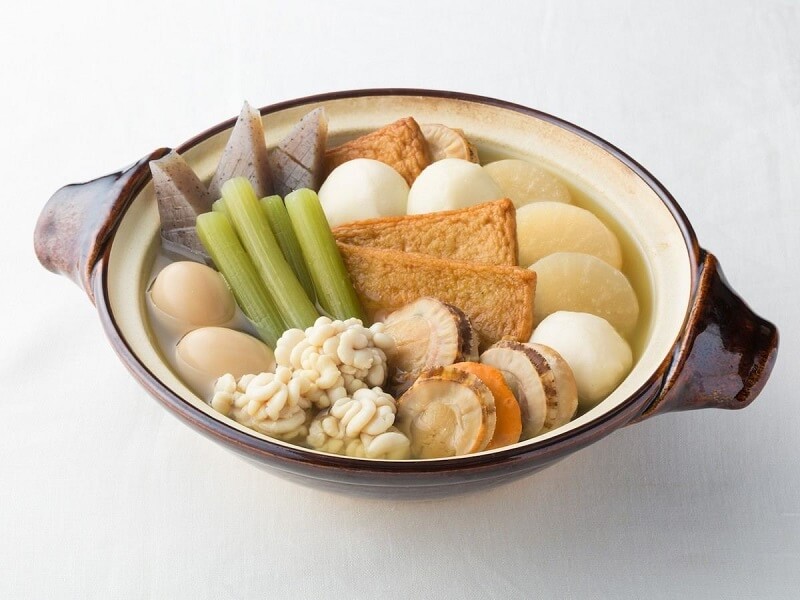 Sapporo-style oden in Hokkaido is a luxurious oden with sea and mountain products in a kelp-flavored soup. There is also an area where you can put a long square fried fish (commonly known as a muffler).

The dish has become so famous that neighbours or Japan have adapted and developed their versions of it.

Oden outside of Japan

In China, 7-11 convenience stores serve oden as haodun (好炖), which is a word play on "good pot." based from the Chinese characters.

In South Korea, the dish is called eomuk-tang or odeng-tang (Korean fish cake soup). They used a loanword from Japan, odeng (오뎅) which is a a synonym of eomuk (fishcakes).

Based on the name, the dish is more of a boiled fishcake dish, rather than oden as it is known in Japan. They call it odeng-tang (오뎅탕) or eomuk-jeongol (어묵전골), with Korean words tang (soup) or jeongol (hot pot) attached to the ingredient name that goes inside.

They also have a street food version that is sold in small carts, like it used to be in Japan. This type comes with a spicy soup, and can be found all over the country.

It is during the Japanese rule of Taiwan that the dish found its way to this beautiful island. In Taiwanese Hokkien, a dialect spoken in Taiwan, oden is referred to as olen, which has become hēilún (黑輪) in Taiwanese Mandarin.

It is often served with tianbula (甜不辣), a popular snack on the many night markets you can find across the cities of Taiwan. This is the equivalent of the Japanese satsuma-age (さつま揚げ), a type of tempura in Kyushu, Japan. 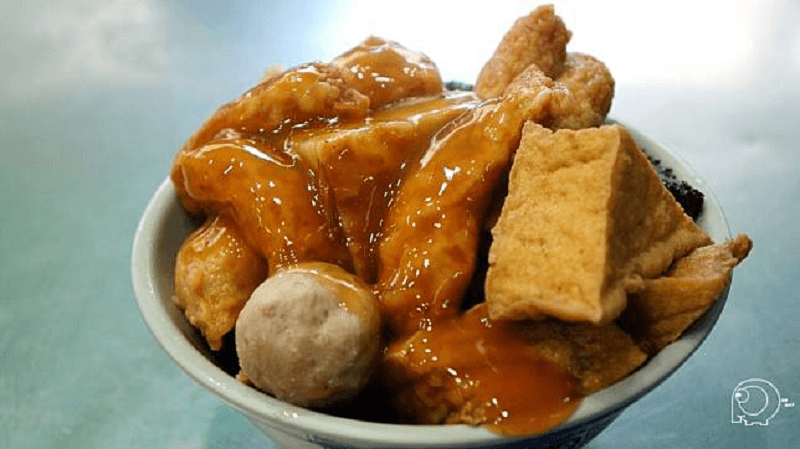 The most modern version of the dish, however, is frequently found in convenience stores, just like in Japan. There, it is called guāndōngzhǔ (關東煮).

What ingredients are part of Oden? 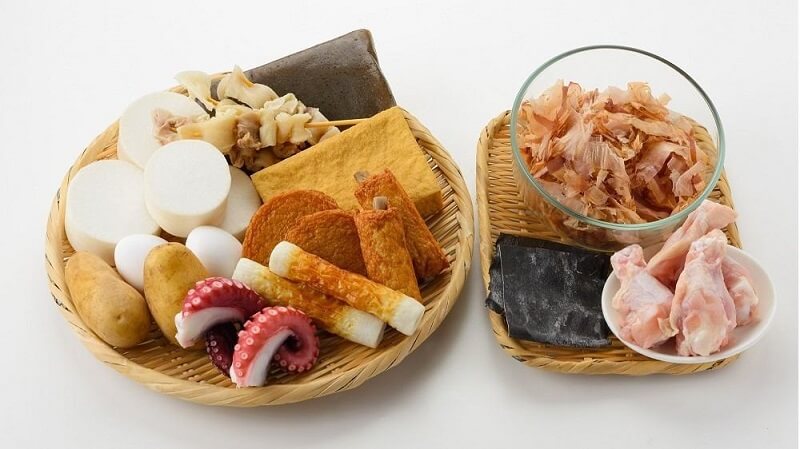 Probably the main ingredient of Oden, Daikin is a type of Japanese white radish. It will soak up the broth, and become super soft and delicious.

This is an essential ingredient to Oden. Chikuwa (ちくわ) are tube-shaped fish-paste cakes. It feels like something inbetween cooked meat and tofu: soft and spongy.

Small pouches made from deep-fried tofu is what Japanese refer to when speaking of Mochiiri Kinchaku (餅入り巾着). Inside, you’ll find a thick mochi rice cake that is a favorite of many people.

These are hard-boiled eggs which have been left in the stock long enough to change color and pick up a delightful amount of salty flavor. They are a tasty and filling treat!

Konnyaku jelly is made from a special kind of potato and features in many Japanese dishes. When soaked in the oden broth, it tastes genuinely delicious.

Shirataki, meaning white waterfall, as mentioned previously, is a healthy type of noodles in Japan. They are made from konnyaku, and look like a bundle tied up with a thick ball. They are added mostly for the chewy texture and because they absorb the flavors of the broth well! 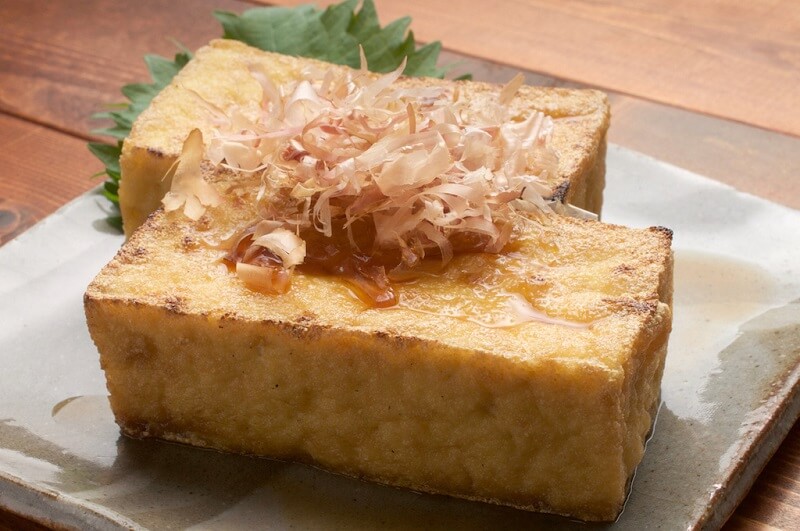 Atsuage (厚揚げ) is a thick slice of fried tofu. There are several other varieties to discover, but the thin "aburaage" and the thick "atsuage" are most common.

Made from thick flour-paste, these tube-shaped snacks are one of the filling, consistent oden ingredients.

Tsukune (つくね) are meatloaves. They are often made from ground chicken, sometimes pork or beef. Tsukune take the shape of small balls, and are commonly eaten at yakitori (焼き鳥) restaurants. But you can also enjoy it in oden, of course.

How to make Oden at home? 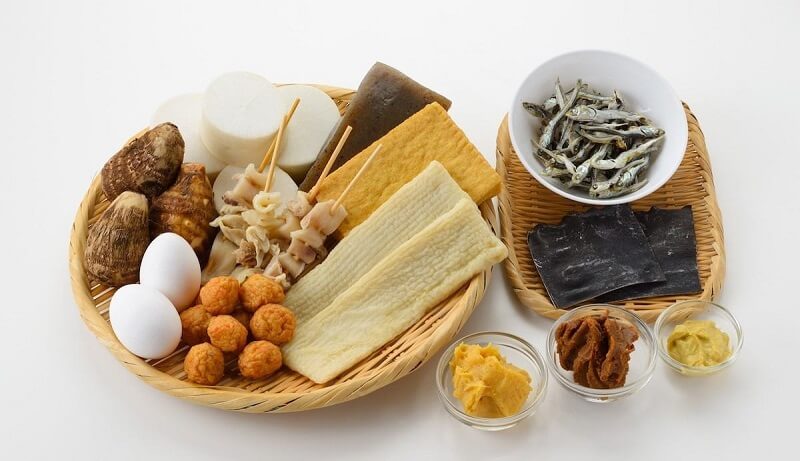 It’s very easy and can be a fun experience to make oden at home. It’s a perfect dish to share around the table with the whole family. Even better, if you have a kotatsu (コタツ, 炬燵,traditional room heater), you can recreate a classic feeling of hospitality and Japanese winter.

Now that you know exactly what oden is, the different variations, and have all the ingredients in hand, here is how to make it:

Take a donabe (earthenware pot), if you have one, or a large and deep pot, add dashi (Japanese soup stock) and the rest of the seasonings for oden broth.

Cut the daikon, cook the eggs, prepare the octopus on bamboo skewers, chop your konnyaku into smaller pieces, get your mochi filled tofu bags ready and any other ingredients you’d like. Remember, the smaller the pieces, the faster they’ll be ready. Some ingredients are best prepared aside, and then added to the oden broth (boiling the eggs and konnyaku for example)

Now, fill a big pot with water, and bring it to a boil. Then you can start adding your oden set, the fish cakes and fish balls. In Japanese, they are called nerimono (練り物). Leave them only for 15-20 seconds to remove the excess oil, drain them and set them aside.

Add all the ingredients, except for all the fish cakes and mochi packs, in the donabe and bring it to a boil. Once you’re there, lower the heat to simmer (low), and skim off the foam with whatever tool you have. Cook covered on low heat for 30 minutes. Tip: If you don't have time to set aside for 1 hour at the later step, increase cooking time to 45-50 minutes.

Add all the fish cakes and mochi packs and cook them covered on low heat for 30 minutes.

Turn off the heat and set aside (covered) for 1 hour. For simmered food to have more taste, it needs to soak up all the flavors. Tip: A lot of chefs will prepare oden for the day after. The flavor of oden is much tastier after soaking all the broth overnight. After the simmer, don’t place it in the refrigerator right away, but let it cool at room temperature first.

Before eating, reheat the oden for 15 minutes and serve it to your guests with a little karashi (辛子, hot mustard) on the side.