What is Nashi, Japanese Pear?

The Japanese word nashi (梨) simply means pear in English. But today, we’re focusing on the ones that grow in East Asia.

The watery fruit grows from a species of pear tree called Pyrus pyrifolia. The fruit that this tree produces is known by a lot of names, including Asian pear, Japanese pear, apple pear, and nashi pear, among others. When in Japan, you can buy and eat them during autumn. They are in season from August to October. As opposed to western varieties, which have a classic pear shape, nashi is more rounded like an apple. The flesh isn't like what you'd expect from European pears which are buttery, smoother, and softer. Instead, it has brown, white, or yellow skin, and the fruit's flesh is fairly gritty, very watery, and crisp.

There are two main types of nashi found in the land of the rising sun. They are the akanashi (赤梨) and aonashi (青梨). The former features brown skin and a sweet taste while the latter has yellow-green skin and a tart yet refreshing taste.

Is nashi a pear or apple?

Nashi is frequently mistaken for a hybrid of a pear and an apple due to their unusual spherical form, but they are truly an Asian pear.

We can’t discuss the taste of Japanese pears without first looking at the types of nashi prominent in Japan. Note that there are a lot of cultivars of the Asian pear. We’ve listed down some of the well-known ones. You won't forget the Hosui pear experience once you’ve tried one. This cultivar makes excellent baked goods and is usually enjoyed fresh because of its high acid level. Large, golden-skinned fruits are produced by the tree of this type of nashi.

Bite into one and you’ll be treated to a sweet taste and a pleasant aroma. Its skin is thick and tough. Big and round, the Kosui nashi features russeted gold/green skin. Just like the rest of the Asian pears, they have the shape of an apple. Its flesh is sweet and juicy. Texture-wise, they are crisper than the pears from Europe. We recommend eating it fresh once it’s ripe on the tree. 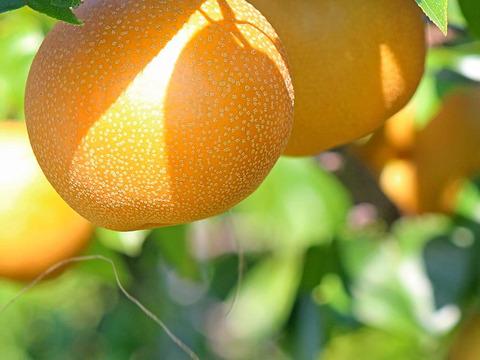 Akizuki nashi is a mix of niitaka nashi and hosui plus kosui. While it may be less sweet than some varieties, it leaves a pleasant aroma in your mouth. It’s like there’s still some nashi left in your mouth. It is also watery. If you’re wondering which among this list is close to an apple, that would be the nijisseiki nashi. It has thin skin and its texture is almost like an apple. The flesh is juicy and tastes like liquid brown sugar. 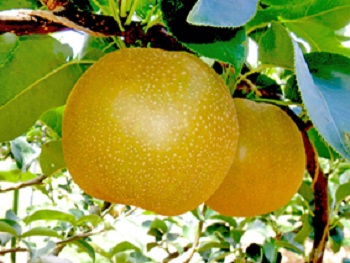 People know the Shinkansen pear for having a small core. That means you'll get to enjoy more flesh from the cultivar. The skin is bitter yet the flesh is super sweet and crisp.

How a Nashi is Eaten When you’re down with a cold, eat a serving of steamed nashi with honey.

Very much like apples, nashi can be eaten fresh and raw. To maximize the refreshment it provides, it’s best served chilled. If you keep them refrigerated, they can be stored for up to three months. So if you’re not eating them soon, it’s best to keep them in your fridge.

Most people only like to eat the flesh. They peel off the skin and slice it into bite-size pieces. But did you know that you’re doing your body a favor when you also eat the skin?

Nashi can also be added to salads and breakfast dishes. It can also be the central ingredient of pastries and desserts. And if you love to drink, make your sake – locally known as nihonshu (日本酒) – special by adding small slices of nashi.

Are you suffering from a cough and cold or have a nasty sore throat? Nashi is a popular remedy for these conditions. All you need to do is take out its core, fill it with honey, and steam it. Let it cool down a bit, scoop out the flesh and eat it.

How much sugar is in a nashi pear?

According to CalorieKing, a piece of pear weighing 122 grams has 12.9 grams of sugar.

Can you eat nashi pear skin? Yes, indeed you can. If you want to maximize the benefits of the nashi for your body, it’s best to eat the skin too. That’s because the skin contains a lot of fiber.

According to the nutrition section of the American Council on Exercise, a large Asian pear includes roughly 10 grams of fiber as opposed to the 7 grams found in a large European pear.

Fiber is important for your digestive system. It helps in bowel movement and prevents constipation. Fiber can also help you feel full longer which can aid in weight loss. This carbohydrate serves as your protection from heart disease and Type 2 diabetes. Since it has antioxidants, the risk of getting any type of cancer decreases.

So the next time you eat nashi, don’t throw away the skin!

Are nashi pears good for you?

Yes, they are. Nashi pears are rich in vitamins and minerals. They also have a lot of water which can help hydrate and cool your body.
One nashi pear provides 13% of the daily recommended value of Vitamin C for women and 10% for men.

Since the Asian pear contains dietary fiber, the bad cholesterol (LDL) gets flushed out of your body, maintaining your cholesterol at a healthy level. You also get potassium which helps lower your blood pressure. In other words, nashi helps keep your heart in top shape.

Nashi pears are ideal for pregnant women because of the folate (folic acid) it contains. The natural form of the B9 vitamin assists the body in reproducing DNA and building new cells. Make it part of your diet if you’re expecting.

Who is Funashi, the pear mascot ? Unofficially standing in for the city of Funabashi, Chiba, is the fictional Japanese mascot character known as Funassyi (Funashi). It was made by a Funabashi native with the intention of lifting the spirits of locals and promoting the area. Due to its following appearances at gatherings and festivals, on countless TV shows, and in commercials, it has become increasingly well-known throughout Japan.

The character has also released four CD albums, six singles, a DVD, starred in a live-action drama special and an anime series, performed a concert at Budokan, and created a character goods shop. Funassyi is regularly used in official events for Chiba prefecture, the city of Funabashi, and Japan itself despite being an unauthorized character because of their popularity and high brand awareness.

Funassyi is a pear (nashi) fairy, not a girl or a guy. Normal pear trees serve as its parents. The fourth of their 274 kids is Funassyi. It was born on July 4 and, as of 2021, will be 1,883 years old (in a literal time frame, it was possibly born in the year AD 138). Its full name is Funadius IV (4, Funadiusu Yonsei), and peaches are its preferred food. The character likes heavy metal music and reveals that Machine Head by Deep Purple was their first album purchase. They also like Aerosmith and Ozzy Osbourne.

Nashi is not just a sweet and juicy treat. It has a lot of health benefits that can help you in more ways than one. It’s a type of fruit you should include in your diet whether you’re trying to lose weight, lower your cholesterol, or just simply improve your overall health. So go ahead and add nashi to your grocery list. Your body will thank you!