Experience Japan’s colorful history through its traditional snacks. Some of Japan's most popular snacks and treats can be traced back centuries. The list is endless, and it can be hard to choose what to try, especially when you don't know exactly what they are! There is a Japanese snack for everyone to enjoy, ranging from sweet to savory, crunchy to soft textures. Amid a culture that favors invention and change, discover the beloved snacks that have stood the test of time in this list of the top 10 traditional Japanese snacks still popular today. With a crunchy exterior and a soft center, experience the best of both worlds through a melon pan. Pan is the Japanese word for bread, but don’t be fooled by its name. The crunchy exterior is made using cookie dough and it does not actually taste like melon. It is named after its physical resemblance to the fruit.

In Western Japan, particularly at Kobe and Hiroshima, the melon pan is otherwise called “sunrise bread”. The name may be different, but they still use the same recipe. You can also find variations that have chocolate chips, maple syrup, or caramel. Some even add custard fillings for an explosion of flavor. Want to feel like royalty? Try Konpeito, one of the oldest Japanese candies. In the 16th century, sugar was hard to come by and it cost a fortune to make these candies. Only the wealthiest had access to it and the Imperial Family still sends Konpeito as a gift in modern times.

Thankfully, Konpeito is more affordable these days and can be enjoyed by everyone. With their vibrant colors and unique star shape, they also make a great display. That is if you can keep yourself from eating them all in one sitting. 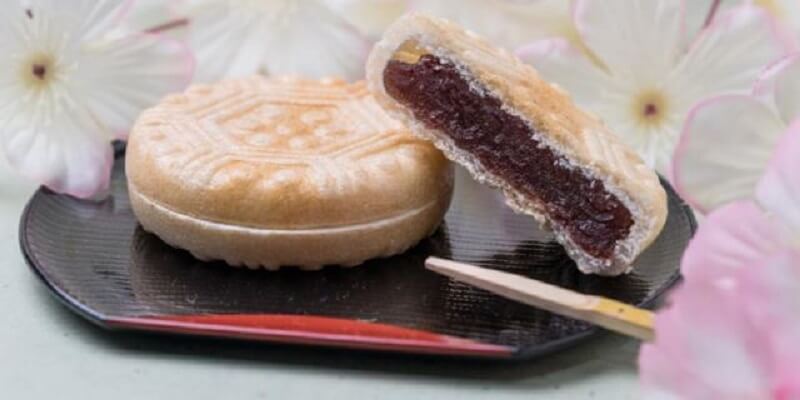 Enjoy fun visuals with a creamy center through Monaka wafers. This snack can be shaped like flowers, animals, and buildings. In their simplest form, they can look round or square and contain red bean paste as a filling.

For an intricate flavor, the red bean paste can be mixed with chestnuts, sesame seeds, or mochi. The wafers themselves are crunchy with a neutral flavor, adding texture without stealing the show. These days, Monaka can also have ice cream fillings to elevate the snacking experience. For a warm snack, try Dango, a sweet Japanese dumpling. Made from glutinous rice flour and uruchi rice flour, these rice balls are often skewed three to five pieces per stick. Known as street food, you can conveniently take it with you while you explore Japan.

There are many ways to enjoy Dango depending on the season. Hanami Dango is popular during spring and is translated as “flower looking” with its pink, white, and green color combination. This can be topped with strawberry or matcha powder for the full spring-in-bloom flavor experience.

Another common variety is the Mitarashi Dango, which uses a glaze of soy sauce and sugar. This is perfect for those craving that sweet-savory combination.

Here is your ultimate guide about dango. Crackers are one of the must-haves in the snack world. Japan’s own version is called senbei and has been around since the 1600s. Legend has it that Osen, a Japanese woman, invented Senbei by flattening and then roasting leftover Dango (chewy rice dumplings).

If you have a sweet tooth, you’ll enjoy Senbei glazed with sugar or icing. If you’re feeling more adventurous, you can also try lemon and other fruit flavors. Traditionally, Senbei is made with salt and soy sauce as a savory cracker. Farmers from back in the day especially enjoyed this type as they wanted to utilize their rice leftovers. Other savory varieties of Senbei include black sesame, seaweed, and red chili pepper. Find out more about Japanese senbei here.

Why have one pancake when you can enjoy two at the same time? Dorayaki is a sandwich made of two pancake-like pastries with a red bean filling. Aside from red bean, other common flavors include matcha green tea, custard, or chestnut cream. The pastry is soft and fluffy, giving it that melt-in-your-mouth feel you would expect from pancakes.

The term “dora” means gong in Japan and is named after its circular shape. A common backstory involves the samurai Benkei who left his gong at a farmer’s house, who then used it to make pancakes.

Legends aside, Dorayaki is also known in Japanese anime and manga as Doraemon’s favorite food. He loves it so much that dorayaki is often used to lead him into traps. Give Dorayaki a try and see why Doraemon loves it so much. We promise the experience will be free from traps. You can learn more about dorayaki in this guide.

No Japanese festival is complete without chocolate-covered bananas. It’s a good way to skip the guilt over sweet snacks with banana being a healthy fruit. Make it even sweeter with chocolate and other dips such as sprinkles, nuts, and candies. Aside from festivals, this snack is also available as street food. Whether you’re craving it during the festival or on your day-to-day, chocolate-covered bananas are easily available.

The chocolate is often solid, which gives it that satisfying crunch, and the soft banana gives it the best texture combination. You can even customize your preferred toppings of nuts and candies or syrup. Enjoy chocolate-covered bananas just the way you like it. Try a mix of donuts and churros the Japanese way with Karinto, made of deep-fried flour, yeast, and sugar. This snack was inspired by the Portuguese during the 1830s. While traditionally sold on the streets, Karinto is also available in grocery stores. Some shops even went as far as specializing in selling Karinto only. Go on a flavor adventure with varieties such as ginger, sweet potato, and bamboo charcoal. 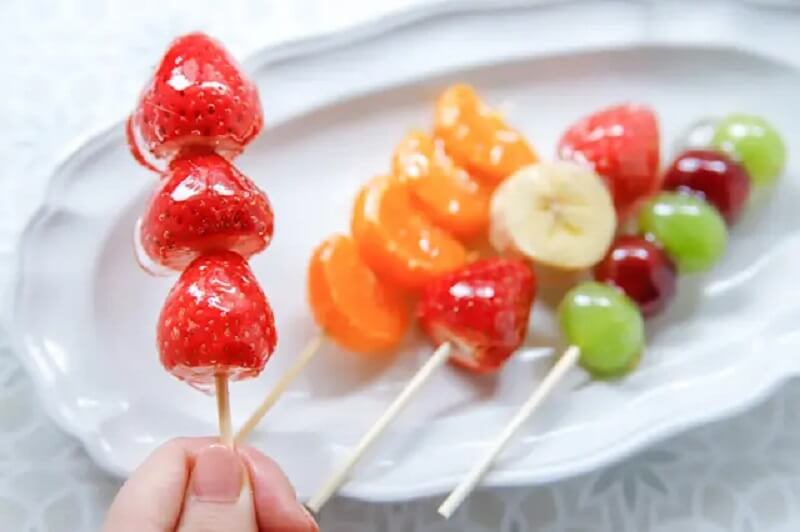 Not to be confused with the anime character, Ichigo Ame is made of strawberries coated with sugar syrup. ‘Ichigo’ means strawberry while ‘Ame’ means candy.  It’s another of the fruit-inclusive snacks you can eat without feeling too guilty. Strawberries are rich in vitamin C, after all.

Japan is also known for growing high-quality fruits, so much so that they are often given as a luxurious gift. Ichigo Ame is still accessible however and is often served on a skewer. As a street food staple, this snack is ideal to take around with you on a hot summer day. Mochi is one of the most popular snacks in Japan. With its chewy texture and variety of fillings, it’s a snack that anyone can enjoy. Mochi is humble in flavor and truly gives its fillings center stage with red bean, matcha paste, plum flavors to name a few.

Making mochi is a tradition in itself with religious meaning.  To this day, provinces continue the tradition of hand-making mochi. Some classes are also available to tourists. Meanwhile, modern times gave way to machines mass-producing mochi. More details about mochi can be found here!

Exploring traditional Japanese snacks is quite an adventure, with historical legends of how snacks came about (Senbei and Dorayaki). You can also see its influence from other cultures, like the Portuguese (Karinto).

The most exciting part is how the Japanese infuse their own culture of inventiveness with the variety of flavors available. Japanese snacks also change with the seasons. Nearly every snack has its own seasonal variety to honor traditions and festivals. For example, sakura flavors are popular during spring.

To experience this for yourself, treat yourself with ZenPop’s snack subscription box, which offers modern and traditional Japanese snacks. One of these featured snacks could arrive with your order. It’s a surprise you arrange for yourself, from yourself. The 5 Best Japanese Sakura Snacks in 2022