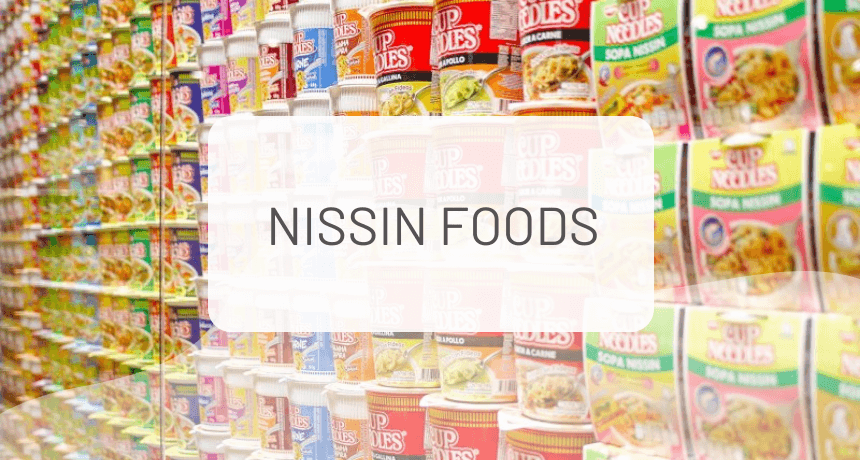 Nissin Foods: A Complete Guide to The Inventor of Instant Noodles

The world of instant noodles is vast and varied, and it all started with Nissin Foods and Momofuku Ando. To complete our guide to ramen, we will get deep into all the amazing instant noodle companies that make it possible for us to enjoy ramen, soba, yakisoba, and other great dishes from the comfort of our home. Instant noodles are a staple product throughout Japan, and on top of that, have become extremely popular all over the world. Not only are they great meals for those on a budget, but some people consider themselves instant noodle connoisseurs, with a goal to find the best tasting instant noodles out there.

The idea of an instant noodle meal is a near universal experience, with different countries even having different takes on certain flavors and individual dishes, resulting in region exclusives and limited-time items. Instant noodles may seem like a regular, everyday item, but we have many great innovators to thank for the near limitless amount of flavors, variety, and convenience tied to instant noodle culture today.

From today, we’ll be taking a look at many of the most famous companies that specialize in instant noodles. Our first company will be Nissin Foods, the originator of the concept of instant noodles and holders of the iconic Cup Noodle brand!

Nissin Foods was founded by Momofuku Ando, the creator of the world's very first instant noodles: Nissin Chicken Ramen. In the beginning, Nissin was a small company that produced salt. 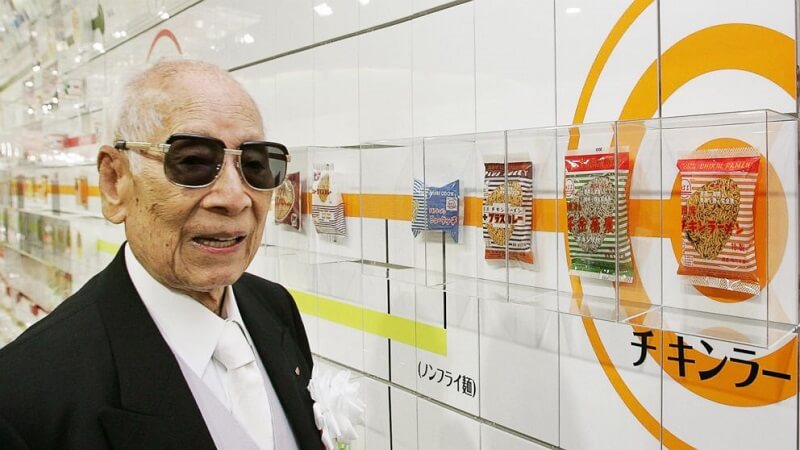 Sometime after WWII, Japan was suffering heavily from food shortages. While bread was recommended instead of rice and other food staples, the concept was at the time, unfamiliar to Japanese cuisine-- as most Japanese dishes feature rice and noodles as the carbohydrate equivalent.  While there certainly was a demand for noodles, the noodle companies at the time were unable to meet the demand, as they would have to make fresh noodles at great supply in order to feed the population.

Ando met this demand for noodles and also developed a method to preserve them so that fresh noodles could be stored. After months of trial and error, on August 25th, 1958, Ando was able to market his very first pack of instant noodles. The noodles were flash fried, together with powdered soup and other ingredients, in order to preserve them until the need came for cooking.

How did Ando come up with this method? He observed that Americans staying in Japan ate noodles by breaking them in half, and then pouring hot water over them to cook. This method inspired the consumption method as well as the eventual final packaging of the Cup Noodle brand-- a styrofoam cup that would hold the flash-fried noodles, so that water could be poured over them to rehydrate them and warm up the soup. The cup would hold in heat well, so that the noodles could be eaten after just a few minutes.

Thus, the original Nissin Chikin Ramen was born! As Nissin grew and its manufacturing process turned into mass production, instant noodles became a staple part of Japanese households, and eventually also spread to the rest of the world. During its first release, the instant noodles were considered a luxury product, selling for up to 600JPY (in today’s currency equivalent.) However, now you can purchase a package of cup noodles for around 100JPY, which is still 3 times less than a cheap bowl of ramen at a restaurant.

Nowadays, you can not only find Nissin cup noodles all over the world, but you can also find many of their special flavors, such as Thai Tom Yum Goong, Cream of Chicken, Laksa, and Kyushu White.

By far, Nissin’s most famous product is their Nissin Cup Noodle brand, with its iconic white packaging with gold and red lettering. Their colors and brand logo are recognizable all around the world, even if the packaging tends to vary per region. These come in many flavors, but the most popular one is likely the original Chicken Ramen recipe.

Let’s take a look at some of the most popular instant ramen flavors that Nissin is known for.

We’ve praised the Nissin RAOH line very highly during this ramen series, and the praise is well deserved. The Nissin RAOH line executes restaurant quality ramen, with premium noodles and special toppings in order to recreate the different flavors of regional ramen in Japan. Nissin RAOH’s most popular flavors include Tonkotsu and Shoyu broth.

They also have other flavors in the form of Yuzu Shio, Dandan Noodles, and Black Garlic Oil. You can purchase variety packs and ramen samplers in order to discern which type of ramen you like best.

One of the most popular cup noodle flavors is the Curry cup noodle. Available almost everyday in Japan along with other flavors such as seafood and chili tomato, the cup noodle curry edition is an interesting blend of curry flavors and toppings on top of a bed of noodles. The aroma is distinctly that of curry, and there are yummy chunks of potatoes and carrots floating in the broth. Speaking of broth, the broth here is a little bit thicker and with a lesser amount, but sticks to the noodles well and is accented by the toppings.

Nissin has such an iconic place in instant noodle history that they have not one, but two instant noodle museums. The two branches are in Yokohama and Osaka, with the Osaka branch being the one at the birthplace of instant noodles.

While the two noodle factories have some identical features, there are some exhibits that are exclusive to each location.

The things you can find at both locations are exhibits about Momofuku Ando and the history of Instant Noodles, including graphs and timelines showing the growth of the industry. They also both have exhibitions of instant noodles including different packaging through the years as well as international expansions. 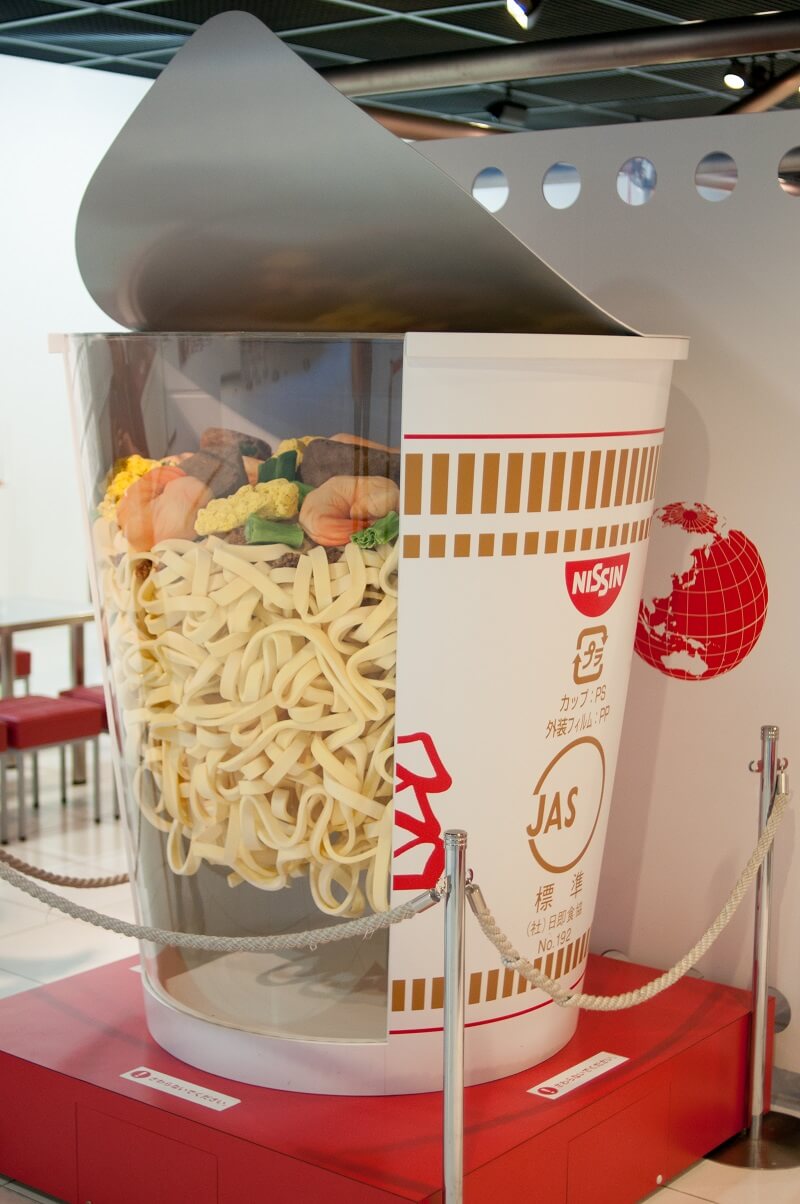 At both locations there are places where you can experience the creation process of cup noodles. At the Chicken Ramen Factory you can experience making the Chicken Ramen by hand, including kneading, seasoning, and flash frying the noodles which turns into instant noodles. Meanwhile, at the "My CUPNOODLES factory", you can create your own original cup noodles, including the experience of decorating the cup and choosing the toppings you want!

The Osaka Cup Noodle Museum has a Drama theatre that features anecdotes that led to the invention of Cup Noodles, as well as short movies about its manufacturing process. They also have an exhibit showcasing Momofuku Ando’s achievements, testimonials, and medals.

The Yokohama exhibit not only has a recreation of Momofuku Ando’s Work Shed, but also an entire CUPNOODLES Park where you can experience being a noodle in a huge factory, going through the manufacturing process! 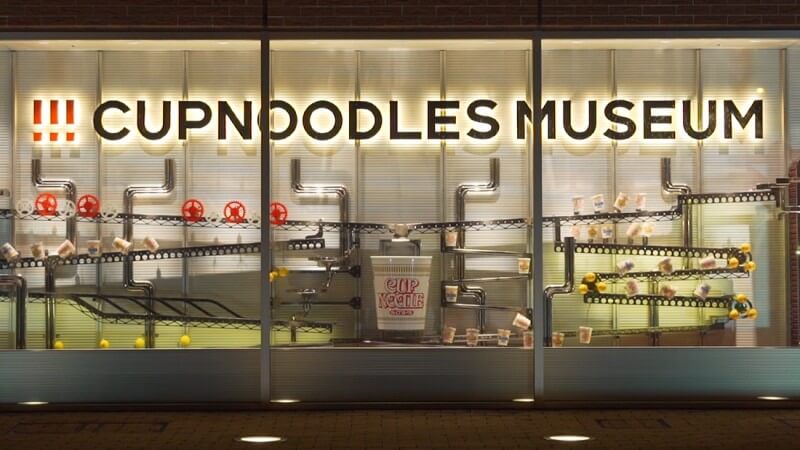 As the progenitor of instant noodles, Nissin Foods offers not only an array of delicious ramen, but a taste of history as well. We can credit Momofuku Ando and his company for the many different kinds of instant noodles we have today.

Interested in Nissin Foods and their instant noodle products? Zenpop’s Ramen pack offers 7 full size instant noodles, all different varieties and from different companies, so that you can experience a taste of Japan’s prolific instant noodle industry!