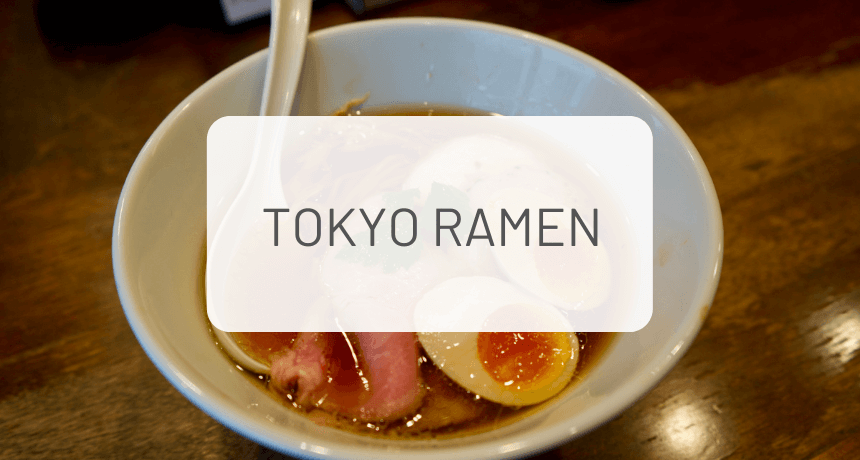 The Complete Guide to Tokyo Ramen

A distinct way to identify different kinds of ramen is by their signature broth. While we learned that Sapporo-style ramen typically contains a miso base and is full of vegetables, Tokyo ramen hosts a milder, more medium body with a base consisting of pork or chicken, flavored with shoyu and dashi. Taking inspiration from the flavors of other Japanese noodle dishes like soba and Chinese-style noodles, Tokyo ramen is probably the second most popular worldwide, next to tonkotsu ramen. We will get into more details in this complete guide to Tokyo Ramen.

At first glance, Tokyo ramen may seem indistinguishable from other soups like soba or its Yokohama-style counterparts, but there are distinct differences in the broth and noodles that give it its own unique flavor. Let’s dive into the subtleties of the Tokyo Ramen style.

The Origin of Tokyo Ramen 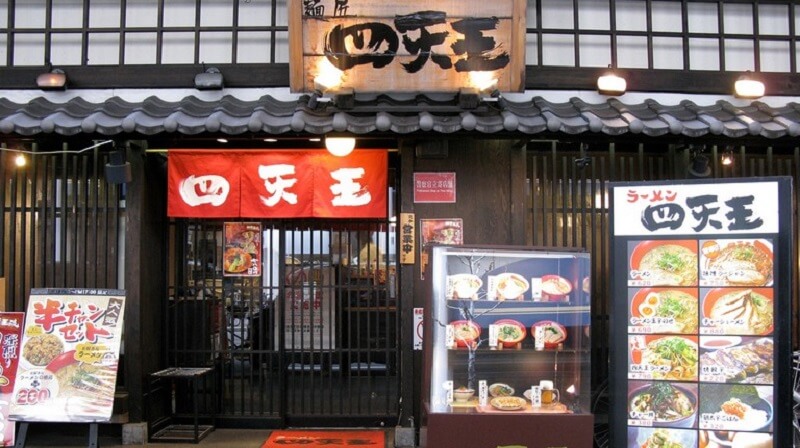 It is said that in 1910 in Asakusa, Tokyo, the restaurant Rairaiken served the very first shoyu ramen, which became known as “Tokyo ramen” at the time. Shoyu is one of the oldest broths used in ramen, with the other being shio. It is for this reason that there are other ramen styles that use shoyu as a base, including what we will cover in another article, Kitakata ramen.

When Chinese noodles became popular in Japan from either foreign settlements or foreign travel, the two cuisines started to blend, introducing the flavors of Chinese cuisine and mixing them together with iconic Japanese ingredients. The emergence of Shoyu ramen in Rairaiken was actually intended to be a fusion dish between Chinese and Japanese cuisines.

It is considered the prototype, or most orthodox ramen, and is particularly popular in the Kanto area. Although nowadays, the pork-bone broth of Tonkotsu ramen has become more popular, the standard ramen available in the Kanto area is still widely considered to be the Tokyo shoyu ramen style. Some consider Tokyo ramen to be the purest form of shoyu ramen among the other regional varieties that use the same broth.

If you happen to be in Tokyo and the menu in a restaurant only says “ramen” without specifying a particular type, it is likely that what they are referring to is shoyu style ramen.

Shoyu ramen has a particular taste that many Japanese people consider comforting and nostalgic. The broth is not as heavy as its tonkotsu or miso counterparts, and instead sports a clear, umami taste. In order to get the broth, it starts with a pork or chicken based soup stock. This can also vary depending on the region-- some use fish or beef. However, the most common is chicken. This can also be mixed with a vegetable broth, or other kinds of broth to give the soup more body.

The broth is then flavored with shoyu, more commonly known as soy sauce. The base soup broth and the other ingredients used in the very first shoyu ramen were distinctly Japanese, while adding a Chinese flavor to the stock by adding soy sauce. This gives the broth a salty flavor without it being particularly heavy. Unlike other soup bases, shoyu broth is usually on the clearer side.

Another interesting fact about shoyu ramen is that the broth is typically never allowed to come to a boil. While the ingredients and the soup itself may simmer lightly, the soup never comes to a full boil, preserving the quality of the soup and not burning away any of the flavors. 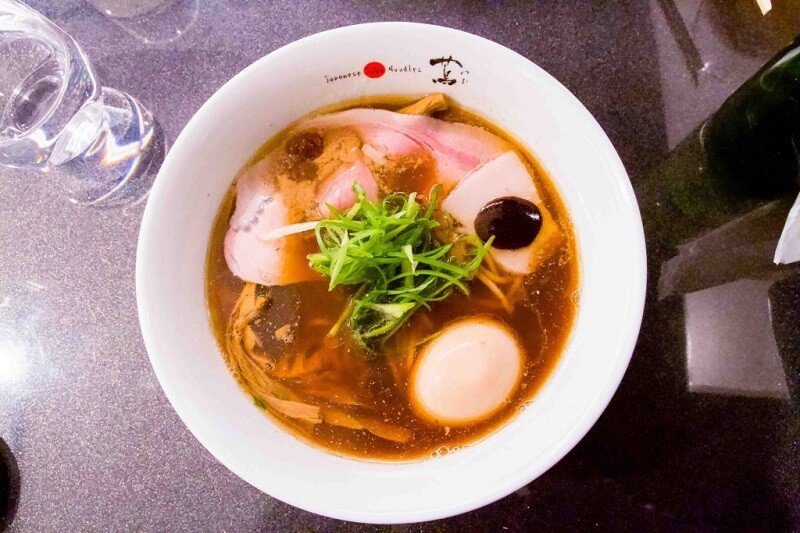 Many chefs integrate other ingredients into the soy sauce or the broth to give it a unique flavor.

You might think that the ramen is a little boring for just being flavored with soy sauce-- but many chefs make their own blend of soy sauce from scratch, rather than buying them in  a large bottle from the grocery store. Some integrate other ingredients into soy sauce to give it a special flavor, and others make the whole base themselves using a secret recipe.

The noodles in shoyu ramen tend to also be curlier than most, with a distinct wave to them rather than being completely straight. Some are thicker than the thin noodles you might find with Hakata ramen, but they have a very nice chew to them that pairs well with the included toppings.

Speaking of toppings! While you can definitely choose to design your ramen your own way, some of the standard toppings that go well with Tokyo ramen are chashu (boiled pork), menma (bamboo shoots), green onions, a spa-boiled egg, and nori (dried seaweed).

It might sound like a standard bowl of ramen, and that’s because it is! Shoyu ramen is not only a traditional flavor that has been around for many years, but it serves as the base or prototype ramen for many other distinct types and varieties. Its rich taste and clear broth evokes a nostalgic feeling in many, making a warm bowl the ultimate comfort food.

Jyunteuchi Daruma opened in 2018 and is already a highly recommended spot to eat this chef’s take on a bowl of classic shoyu ramen. The chef comes from the school of Shokudo Shichisai, which has already spawned other restaurants-- notably the Menya Shichisai branch near Tokyo station. The noodles here are kneaded upon order, giving them a special texture which clings especially well to the shoyu broth. The broth is chicken-based and the toppings are well-balanced, inclusive of pork, green onions, and an egg. 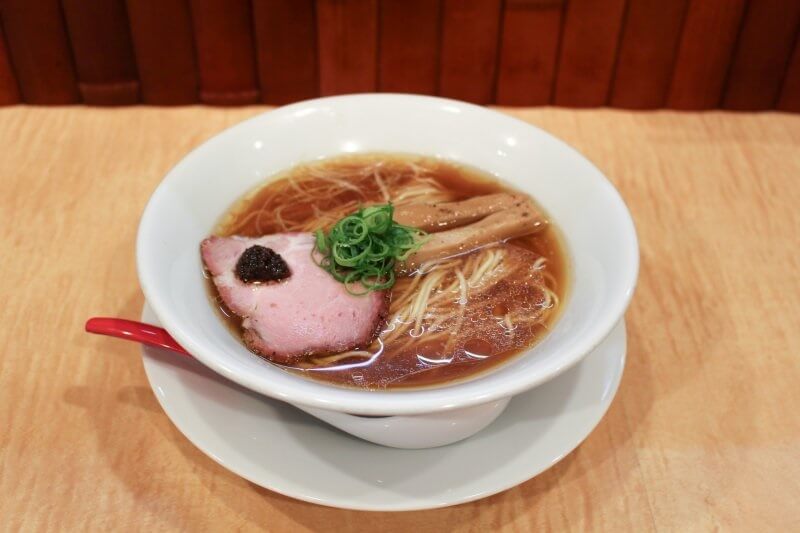 Tsuta is well known for being the first ramen shop to receive a Michelin star. If you really want to upgrade your shoyu ramen experience, this is definitely a must-see. Specializing in shoyu ramen (and soba,) Tsuta’s iconic broth includes chicken, vegetables, clam, kelp, niboshi dried fish and bonito flakes, but also truffle oil and special barrel-aged shoyu. It is said that the shoyu used for the ramen was barrel-aged for two years, giving the soup a complex flavor and a great twist on classic Tokyo ramen.

Though the trip is a splurge and the line may be a little long, splurging on either their special shoyu ramen at 3,500JPY which contains black truffle and roasted chashu is definitely worth the wait. You can also sample their simpler basic shoyu ramen priced at 1,300JPY, which still hits the spot when it comes to elevating the flavors of shoyu ramen.

Harukiya Ramen’s website opens with a banner highlighting their philosophy, “an unchanging delicious taste.” What started as a street stall in 1949 has continued to serve customers delicious shoyu ramen for half a century. Located in Ogikubo, Tokyo, Harukiya’s secrets lie in the unique broth, flavored richly with niboshi, and the fresh noodles that are kneaded every morning.

The noodles and soup in Harukiya’s menu are all handmade, and celebrate not only the delicious recipe that has been in use for half a century, but the classic flavors of Tokyo-style Shoyu ramen, incorporating the flavors of both Japanese and Chinese cuisine into a single, filling dish. They also have a branch at Kichijoji, which combines the classic ramen styles with new, exciting flavors!

Nissin RAOH astounds us again and cements itself as a premium among instant ramen, coming with a chicken-based shoyu broth that clings very well to the noodles. It goes well with a boiled egg, any additions of toppings, and even char siu pork. The shoyu broth is a little heavier than most, but with it comes a special meaty taste that makes the instant noodles especially filling, even at just a single serving. The noodles are slightly elastic in texture and have a good chew to them as well.

Another premium shoyu ramen is Maruchan’s Seimen Rich Shoyu Ramen, with an equally strong soy sauce broth. The soup base is chicken and pork, mixed in with dried niboshi, tamari, and shoyu. Many think that the Maruchan variety is equivalent to restaurant quality shoyu ramen. Its noodles are slightly thick like traditional Japanese ramen, but the real star of Maruchan is the soup-- the perfect balance of salty and umami flavor packed into a single cup.

Maruchan Seimen Ramen comes with a liquid soup packet instead of powder. You blend the soup with some water, and you’re in for a filling, complex broth and noodles with a perfect bite for an amazing meal.

Sano Shoyu Ramen has a delicate chicken soup base flavored with a light soy, making for a clearer, more delicate broth. Unlike the other two options, Sano’s offers a tangier soup, and is perfect for anyone that prefers a lighter, more simple option for their ramen. The toppings include bamboo shoots and spring onions, and a little bit of chashu pork. This proves that ramen need not be too complicated to be good. With good quality soup, a neat selection of ingredients, and a well-cooked serving of noodles, the Sano Shoyu Ramen stands out even with its relative simplicity.

Are you a fan of shoyu ramen? Do you prefer the classic Tokyo Ramen style, or are you looking for more daring flavors? Keep up with Zenpop’s Ramen Guide to discover more options for regional ramen around Japan!

If you’d like to get a taste of these instant noodles, why not take a look at our Japanese Ramen Pack, which includes 7 full-sized servings of different varieties of instant ramen!