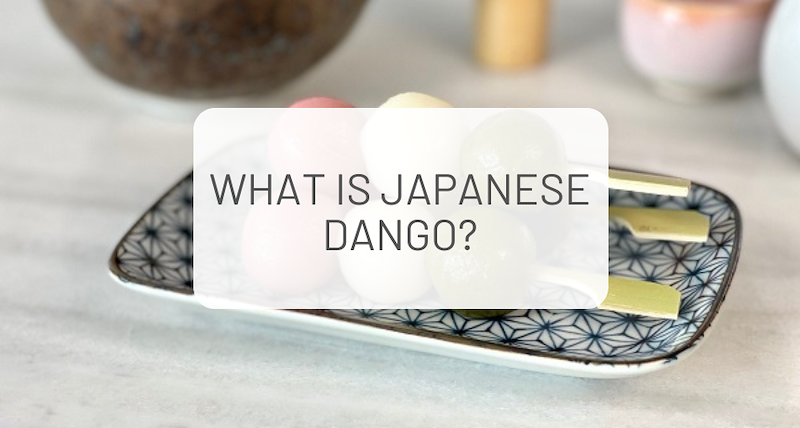 One of the most famous wagashi, or Japanese sweets, ever created is dango (団子). Japanese dango are round glutinous rice flour (mochiko) dumplings that are served with a bamboo stick. On each skewer, there are typically three to five dango balls.

The rice flour used for Dango is mixed with uruchi rice flour. It is different from the method of making mochi, which is made after steaming glutinous rice. Now you may wonder, are Dango and Mochi the same? No they're not, and we'll tell you why!

In this article we'll explore the differences between a mitarashi dango and a hanami dango, but what's even better, we'll teach you how to make dango at home following an easy recipe at the end!

What shape does a Dango have? 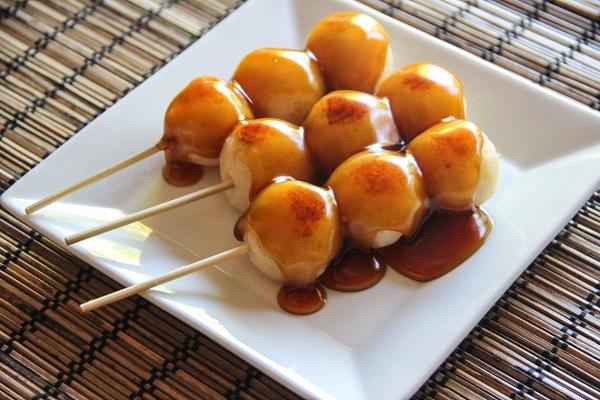 Dango is usually finished round shaped, three to five dango are often served on a skewer (skewered dango pieces are called kushi-dango, 串団子). Generally, dango are classified under the category of wagashi (learn more about wagashi in our ultimate guide here), and are often served with green tea. It is eaten year-round, but the different varieties are traditionally eaten in given seasons.

What is the history of Dango?

The origin of dango may date back hundreds of years, like a number of Japanese sweets and confections. It is believed that nuts were first ground into a fine meal, combined with rice porridge, and then molded into dango balls as long back as two thousand years ago. Dango can be compared to a healthy, home-made version of a hunter-gatherer popsicle from the Stone Age.

The contemporary dango is said to have been invented at Kyoto's Kamo Mitarashi tea establishment in the early 1900s. According to legend, an emperor's visit to Kyoto's Shimogamo Shrine in the 1300s served as the inspiration for Mitarashi dango.

According to legend, the emperor noticed five bubbles while washing his hands in the mitarashi (purifying water) at the shrine's entryway. The five spherical bubbles represented the five dumpling balls of Mitarashi dango. Soon, pilgrims to the close-by Shimogamo Shrine donated Mitarashi dango as a sign of respect and a wish for good fortune for the coming year. The cherry on top of Mitarashi dango is a sweet and salty soy sauce brown sugar syrup, which makes it impossible to resist. The shrine visitors undoubtedly took those same dango home to eat after paying their respects.

Dango are well-established in contemporary Japanese language and culture. Dango occasionally carries a bad connotation. A dango, in the strategy board game Go, is a pointless group of stones. Dango also carries a benevolent or practical meaning. A common fashion statement is a dango hairstyle with a circular bun on each side of the head. Hana yori dango is an idiom that directly translates to "dango instead of flowers" and implies "choose practicality over pretentiousness." 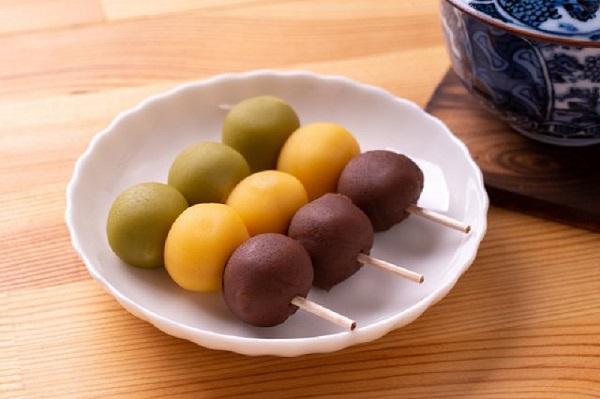 Simple dango balls have a sweet rice flavor. Although it seems uninteresting, the texture is what sets this Japanese dessert apart. Soft, chewable, and yet firm and toothsome. A topping such as sweetened black sesame paste, sweet soy sauce, or anko is included with some dangos (sweet red bean paste).

They are frequently topped with sweet soy sauce syrup or red bean paste (anko). The soft and chewy dango are deserved of the praise they have received in the world of Japanese snacks. The nicest part about dango is that, thanks to its pierced stick resemblance to a lollipop, they make the ideal portable street snack!

There are many different types and flavors of dango. On a barbecue, soy sauce-flavored shoyu dango are baked. Sesame seeds are a covering on goma dango. Green tea flavoring is used in cha dango. Tsukimi dango are plain white dango that are consumed during the autumn full moon viewing festival without a skewer (tsukimi).

Hanami, or the festival of cherry blossom viewing, is when hanami dango, which are tricolored, first appear. Perhaps the most well-known variety of dango is mitarashi. After being grilled, dango balls are covered in a sweet soy glaze. We don't want to "roll out" too many of these adorable balls and overwhelm you, but there are many different varieties of dango, including Sasa, Kinako, and Otoko.

What is dango filled with? 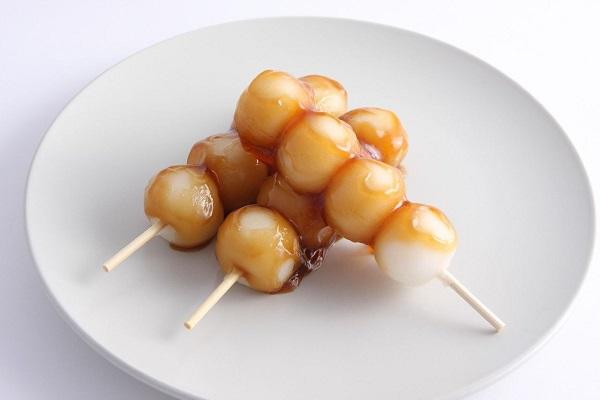 Although plain dango are usually not filled with anything, but come with a topping instead, some variations have delicious fillings.

Is dango same as mochi?

You're not alone if you think that dango sounds a lot like mochi. Mochi and dango are both made in a similar manner, however there are a few variations. While mochi is created from steamed and pounded rice, dango is formed from mochiko (mochigome).

Dango are smaller, stiffer, and typically covered in sauce rather than being filled, whereas mochi are larger, softer, and occasionally filled with anko or ice cream. Another near relative of dango is the daifuku. Although it has a thinner skin than mochi, daifuku are also made using mochigome rather than mochiko. The main characteristic of daifuku is that it is usually filled with surprises like strawberries or anko.

What are the types of dango?

Japanese love dango, and have always been very creative when it comes to make their confectionneries unique and stand out. Dango has seen numerous variations over the year, and today you can find plenty of recipes. Some are seasonal, others carry deeper meaning. Find some of the most commonly eaten dango in our list below!

How to make dango at home

As you’ve seen, there are many different types of dangos. For this article, we’ve found and summarized a very easy hanami dango recipe.

What is hanami dango? 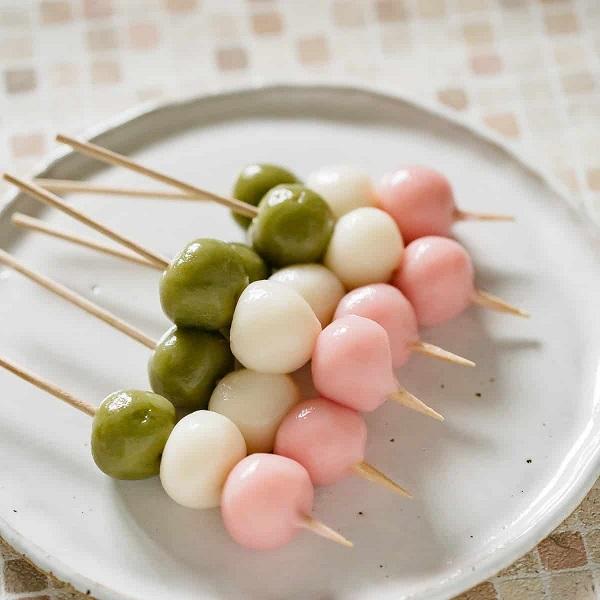 Hanami dango is a year round dessert that is enjoyed most commonly during the cherry blossom viewing season in Japan. This coincides with the beginning of spring, and the three colors are said to symbolize the pink of the spring cherry blossoms, the white of the winter snow, and the green of the summer grass. They are made with sweet rice flour and are bright, chewy, soft, and delicious.

How to Make Hanami Dango in 10 steps: 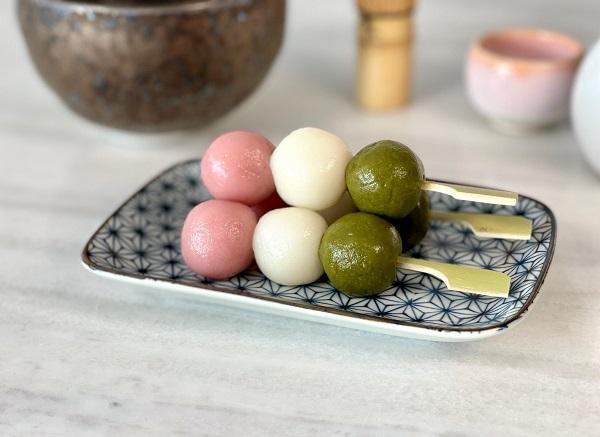 Here you have a recap of how to make easy hanami dango at home in video!

Now you know everything there is to know about Dango. Have more questions? Let us know and we'll make sure to find the answers for you!

Get your own Dango delivered to your door, or even better, we sometimes include some DIY dango kits in our Japanese snack boxes! 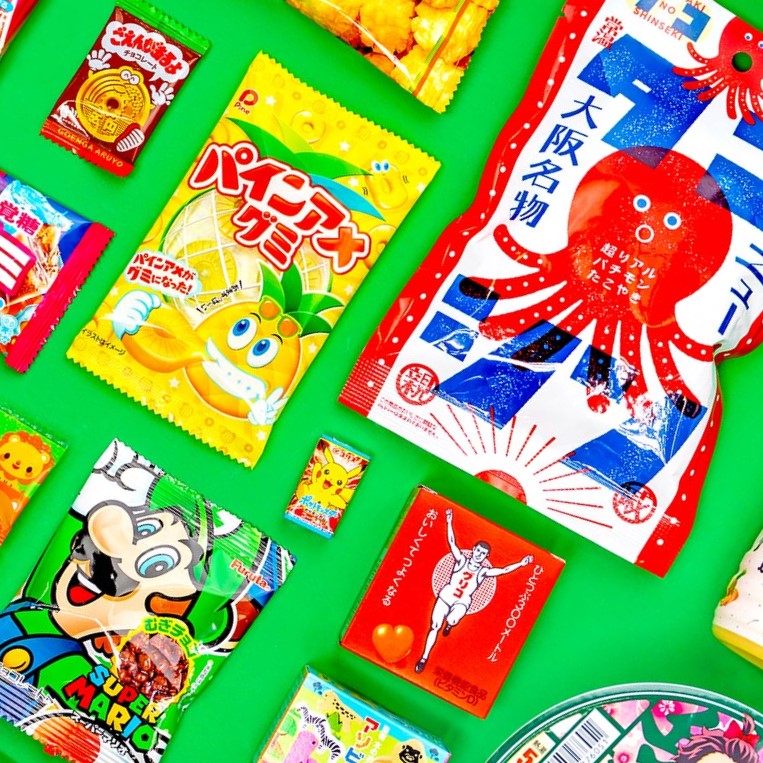