What Is Japanese Taiyaki?

What exactly is Taiyaki, the Japanese sweet bean paste waffle? Today, we’re introducing you to a classic Japanese street food called taiyaki (鯛焼き). It is a well-known, fish-shaped cake filled with anko (red bean paste), but you can see it available in other flavors too.

You can think of it as a waffle. Freshly made and warm when served, they are often sold in local shops, festivals, and street fairs. Taiyaki is consumed all year round, but it’s a nice snack during the winter to keep you warm. If you visit Japan and witness how they’re cooked, you’ll see them heated in an iron mold. Let’s learn more about this delectable delight.

Why Is Taiyaki Called Taiyaki? 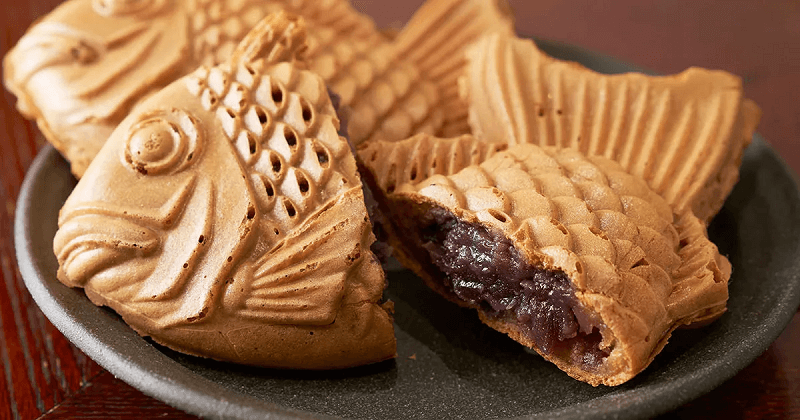 The word taiyaki is split into two parts, tai (鯛) and yaki (焼き). The former means red seabream (a species of fish) while the latter means to bake. While it literally means baked sea bream, the snack only takes the shape of this species of fish.

Taiyaki has a smaller version called kingyoyaki (金魚焼き), which literally translated to baked goldfish. These are typically sold by five or more.

The History of Taiyaki Did you know that the original wasn’t a fish-shaped cake? Taiyaki came from the stuffed pancake snack called imagawayaki (今川焼) or oobanyaki (大判焼き) as they call it in the Kansai region (where Kyoto and Osaka are located).

It was initially sold in Kanda Imagawabashi bridge (神田今川橋) during Japan’s Edo period. Its name came from the place where it was originally sold, which is in Tokyo’s Kanda district. Similar to taiyaki, imagawayaki is a cake that sandwiches the anko and is baked in round molds. The main difference is that its batter is thicker than the taiyaki. Therefore, you can expect a soft consistency when eating it.

While it was invented about a century ago, this Japanese street food only became well-known in 1976, a time when Oyoge Taiyaki-kun (およげたいやきくん) by Masato Shimon became popular among people of all ages.

Oyoge Taiyaki-kun, which means “Swim! Taiyaki,” holds the record of best-selling song in Japan. You can actually Google that. We promise you that the song will come up as the result!

Why Is Taiyaki a Fish?

There is no solid evidence of why taiyaki is shaped like a fish. But people believe that it was because the red sea bream was a luxury at the time. So eating one would make a person feel that they’re consuming something expensive.

In Japan, the word tai is linked to the word medetai (めでたい), which means happy or auspicious. If a person wants to bring luck to their life, they’d eat taiyaki.

What Your First Taiyaki Bite Says About You 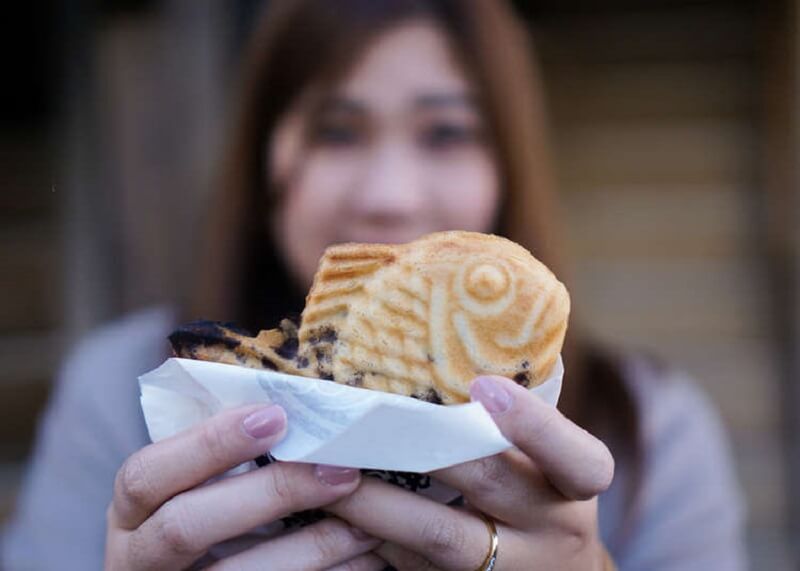 Where you start eating taiyaki reveals something about your personality.

In Japan, your first bite of the taiyaki is a big deal. Don’t be surprised if you get asked which part you bite on first. People just want to know more about your personality.

What Is Taiyaki Batter Made of?

Discover how taiyaki is made.

What’s great about taiyaki is that you can easily make them at home. It’s almost the same as cooking waffles, but you need your fish mold, though. On top of that, achieving that golden-brown color takes practice.

All recipes of taiyaki consist of flour, sugar, egg, milk, baking powder, and water. But the flour will vary depending on the consistency you’re going for, which is either crispy or fluffy. Other people even use mochi flour to create something soft and chewy.

If you’re trying to make one, ensure that you don’t overfill your plan. Experts suggest filling only half of the pan on both sides at the beginning. Once you’ve added your paste, go ahead and fill the pan slowly. If the batter spills over on the side, remove the edges with either a knife or scissors once it’s cooked.

Taiyaki experts also suggest cooking the snack on medium-low heat. The first side should be cooked for three minutes. Afterward, you can flip the pan until the taiyaki is golden brown.

What Are Popular Taiyaki Flavors?

Anko is the traditional taiyaki flavor.

During the preparation of taiyaki, the batter is poured on both sides of the mold. The filling is then placed on one side. Finally, the mold gets closed, sandwiching the filling. Here are some of those popular fillings.

If you’re looking for the original flavor, anko-filled taiyaki is the way to go. A store may serve the creamy version or the chunky version (with bits of beans) of the paste. Some people prefer the former, while others the latter. Try both and see which one suits your taste.

Custard cream is among the classic fillings of taiyaki. Most stores will have this flavor. It is loved by people of all ages.

Another classic feeling, chocolate-filled taiyaki is yet another well-loved flavor. Some stores just place chocolate sauce. Others would add chocolate to the batter. If you’re making taiyaki with this filling, try it with Nutella!

If you’d rather stick to quintessentially Japanese flavors, why not try a match-filled taiyaki? You’ll even love it if it’s a combination of matcha and red beans.

In Japan, chestnuts are harvested during fall. This flavor may be seasonal, but it is still a must-try. Just like matcha, it can also be mixed with red bean paste.

This is another common flavor you’ll see in stores. Pair it up with tea to fully enjoy the warmth.

Taiyaki is not all about sweet flavors. Some stores invented their own recipes and came up with something savory. While rare, it’s possible to find taiyaki with meat and veggies inside.

This is another seasonal treat. On top of enjoying spring, you can appreciate the pink-colored cake offered by some stores. It is among the unique flavors of taiyaki.

Now when it comes to Taiyaki, we can't deliver you freshly baked ones, but some of the most famous confectionery producers in Japan make taiyaki-style wafers that we have regularly in our ZenPop Snack box! You should check it out and treat yourself to some of Japan's most delicious snacks. What should you snack on while watching anime?