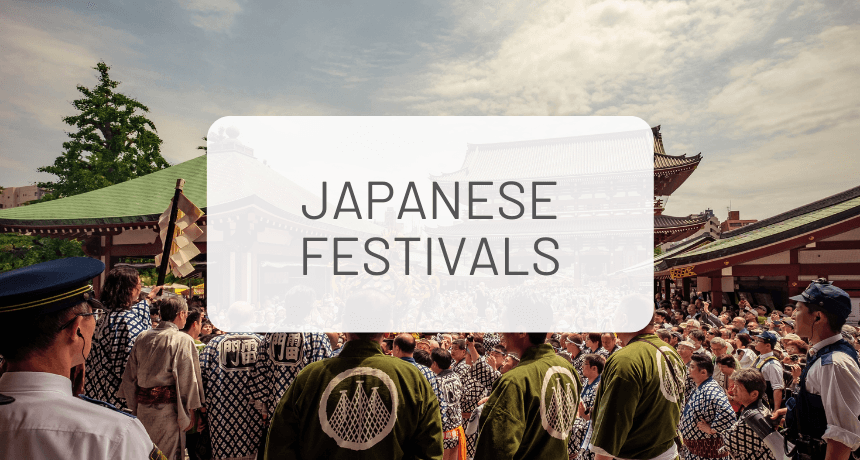 お祭り, pronounced omatsuri, is the Japanese word for festival. You’re thinking about the 4th of July parade in the states, a green St. Patrick’s day, Easter or Christmas, I’m talking about over 100,000 festivals across the country. Some even estimate at around 300,000.

Festivals in Japan are sacred. Some are linked to religion, others to local traditions and beliefs. In this article we’ll cover everything you need to know about omatsuri in Japan, from where to when, how to why!

There is a festival for everything: yes, even a penis festival for fertility, because, why not? Festivals can be fun, exciting, and they can be controversial too, like a festival reserved for men that forced the Olympic torch relay to make a detour. Each and every one carries its own story, and I’ll introduce you to a few down below. 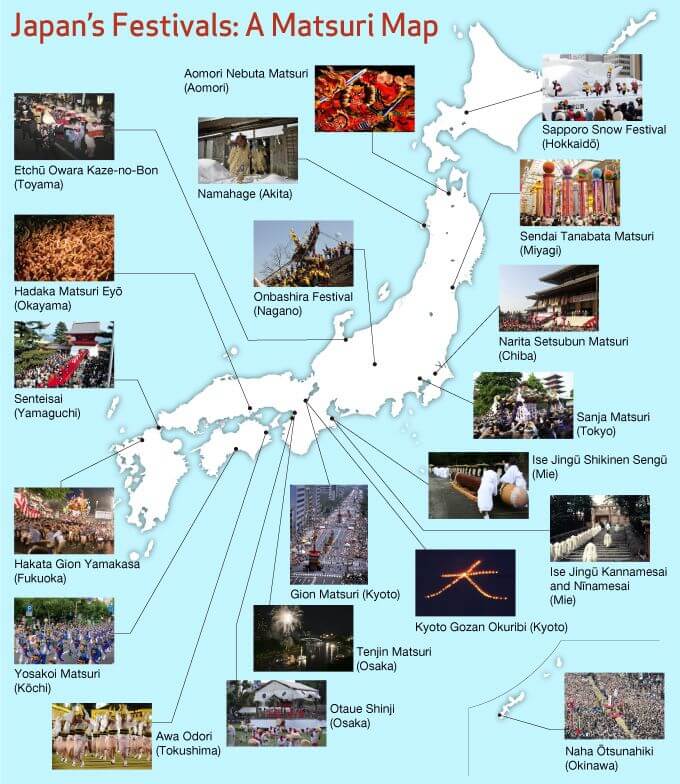 A lot of the local celebrations trace their origins back to China. Of course they have seen a lot of changes over the years, and most of them might not even reflect the original reason for the celebration.

Nearly all festivals will be linked to a local shrine or temple. To help identify the differences between the two: shrines are linked to the indigenous Shinto religion whereas temples are mostly related to Buddhism, a religion introduced from China way way back.

Interestingly, a lot of festivals will not have a specific date, rather they’ll be celebrated the first weekend, or Thursday of a month. I picked Thursday randomly.

One thing they will all have in common is food. YES PLEASE! You may not typically associate Japan with street food compared to countries in SouthEast Asia like Thaïland or Vietnam. However, festivals are the one occasion where the local chef’s pull out their carts and skewers to mix up some of the best on the go treats you’ll ever taste.

I don’t even want to go into the details of the tare (dipping sauce) covered yakitori (chicken skewers); but I have to! I mean, the slightly browned chicken skin brushed with the delicious sauce is something every matsuri goer is looking forward to. Don’t forget the yakisoba, taiyaki, takoyaki and okonomiyaki. I’m getting carried away.

These meals have nearly as much historical importance as the events themselves, as for Japanese people they are all a representation of omotenashi: the Japanese philosophy of hospitality.

Some of the main festivals in Japan have deep roots in history, and carry a great importance with them. Come to mind Obon, a festival celebrated in August in memory of the elders, or Setsubun, celebrated the day before the beginning of Spring, to mark the separation of seasons.

Now, down below, I’d love to introduce you to some of the best national, and local festivals that you may want to visit on your next trip to Japan! 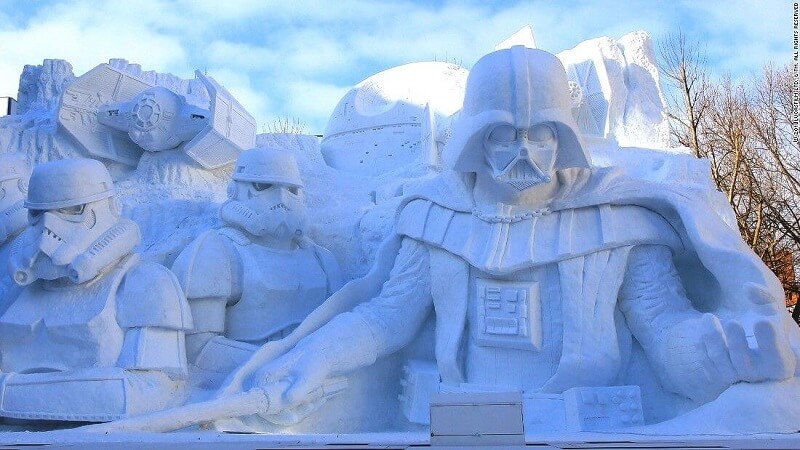 It’s freezing cold up in Hokkaido, the northern island of Japan, and that’s exactly what they need to start the Snow Festival every year. There’s only 3 more like it across the world, but this one’s quite unique.

The Sapporo Snow Festival is actually not very historical, and doesn’t carry any religious or traditional meaning, but still has a cool backstory to it.

In the 1950s, a few schoolchildren, after a long day spent in their textbooks, went outside to Odori park, and blew off some steam by building 6 amazing snow sculptures. They were so good people from all over the town came to see this.

70 years later, people from all over the world, around 2 million visitors each year, come to visit the magnificent snow and ice sculptures that are erected in the cold winter months of Sapporo. 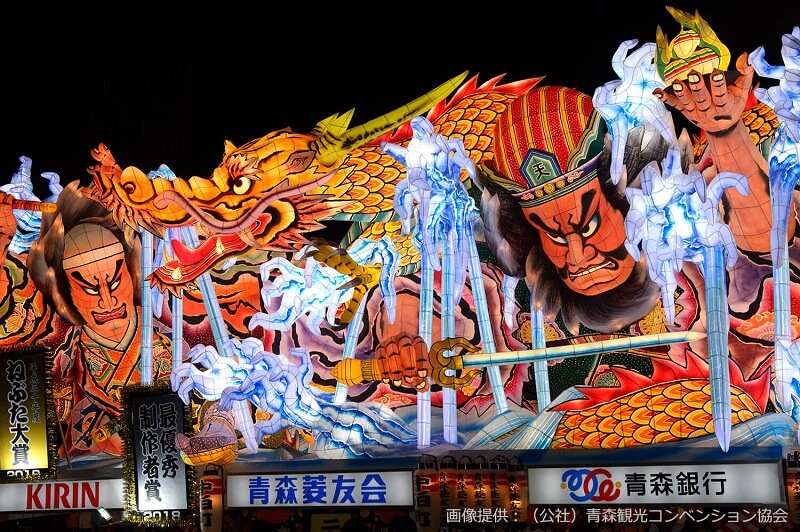 Let’s go a little further south. Just beneath the island of Hokkaido, you’ll find the prefecture of Aomori on the main island of Honshu. At the beginning of August, the locals love to celebrate the Nebuta Matsuri.

The name Nebuta comes from the paper floats that people parade throughout the city on that day. This festival aims to represent heroic historical figures, and display their stories through extravagant and colorful dances in the city’s streets.

People from all over the country come to visit this unique show every year, on the 6 and 7th of August.

阿波踊り, awa odori, the Awa Dance Festival of the city of Tokushima. We’re way further south than the two previous ones here. Located on the small of the four main islands, Shikoku, this festival is the largest dance festival of the country.

A lot of beautiful costumes, and choreographies are displayed in the city as part of the larger national Obon festival I mentioned previously.
Also held in the middle of August, this festival traces its origins back to the 16th century although the name was only used since the 20th century. The story goes that back then, the local daimyô, feudal lord, threw a party where everyone got so drunk that they went out on the streets in front of the castle and started dancing.

Long live the king. (His name was Lord Hachisuka Iemasa). 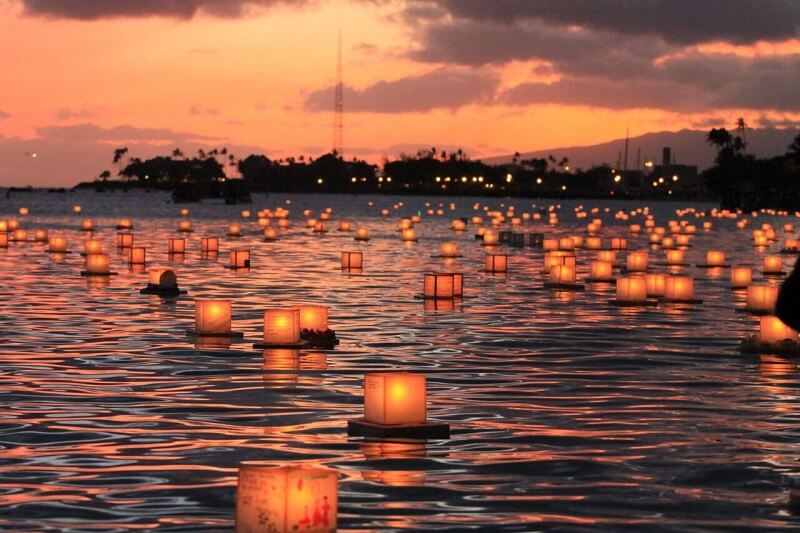 I cannot go any further without mentioning probably the most important festival to Japanese people. Obon celebrates the dead. This may sound a little strange at first, but in Buddhist cultures, and more generally in Asia, as well as other parts of the world, this is a very common and cherished tradition.

It has been over 500 years now that the Japanese use this opportunity to honor their ancestors. The festival always lasts three days, but is celebrated at different times throughout the month of August, and sometimes in September, in Japan.

As mentioned for the Awa Odori festival, Obon is often associated with specific dances. Every city, sometimes district, or local shrine, will have its own dance and traditions associated with it.

The festival’s dance is a celebration of the dead’s suffering being alleviated thanks to the family’s prayers and dedication. It’s a dance of joy that represents the happiness of the dancers.

Our local, national festival here in Osaka. Celebrated every year on the 24th and 25th of July, this festival is associated with the Tenmangu shrine, and is the third largest festival in the country.

One can trace its origin all the way back to the 10th century. That’s over 1.000 years of history! The tradition aims to honor the deity Sugawara Michizane, representing the scholarship in Shinto culture.

Locals will invite the deity to leave the shrine, and take him on a journey through the city, and along the river, to finally take him back to her home to rest until the following year. The parade attracts thousands and thousands of visitors, and follows a very strict schedule.

The whole journey through the streets, and over the river is planned by the minute, and every moment of it is used as a reason to celebrate. The Ogawa river banks will be filled with food stalls and welcome all the visitors with refreshments and snacks. 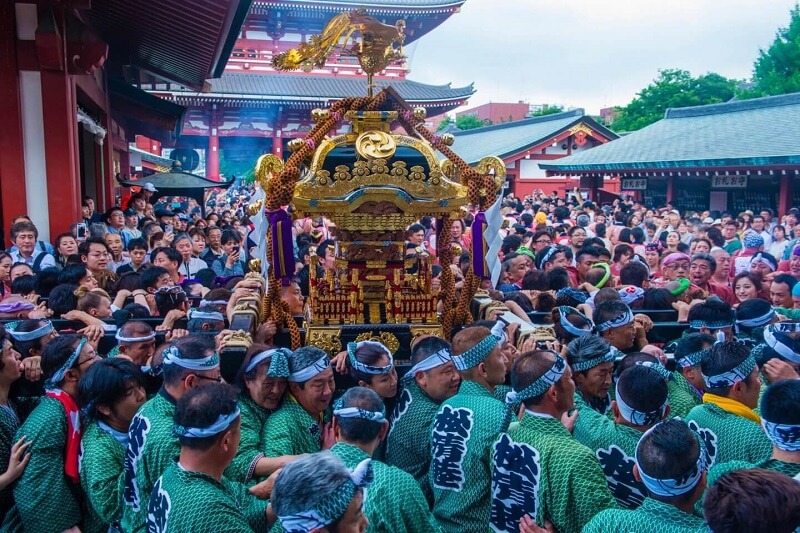 Together with the Tenjin festival in Osaka, and the Gion festival in Kyoto, the Kanda Matsuri completes the leading trio of most popular festivals in Japan.

It dates back to the 17th century, and celebrates the victory of Tokugawa Ieyasu, one of the three founding members of modern Japan with Oda Nobunaga and Hideyoshi Toyotomi.

The procession of this festival seeks to display some old heirlooms from the former leader and commemorates a decisive moment in Japanese history.

Back in Kyoto, the former capital, the festival takes place at the Yakasa Shrine in the second half of July. If you’re looking for protection from diseases and purification, that’s the one you’ll want to attend.

It’s a festival famous for the three night celebration that leads up to the giant parade through the city’s streets. The origins actually bring us to an epidemic that ravaged the city and people started praying for purification. People blamed the plague on the anger of the gods, and thought that the purification ritual might appease them.

Today remains a spectacular show, and a well worth visit to the festival! 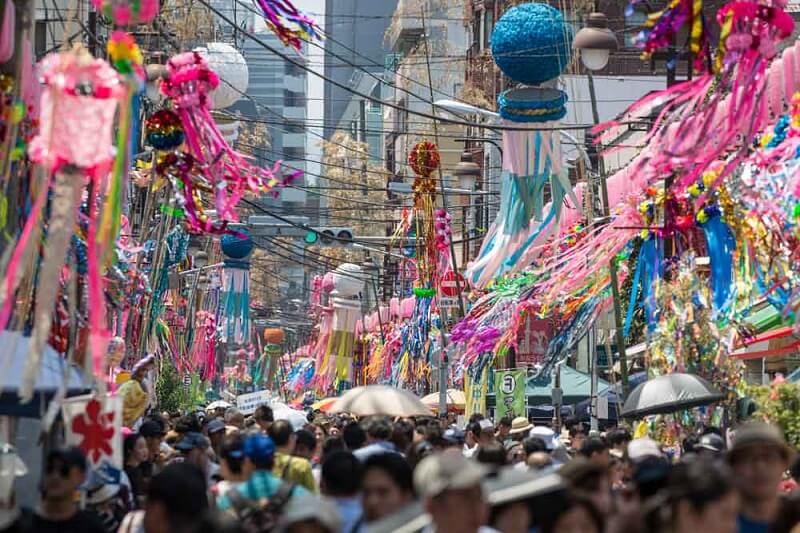 The evening of the seventh of July is also known as 星祭り, Hoshi Matsuri, the Star Festival. It’s the celebration of a sad love story between Orihime and Hikoboshi.
The two lovers are separated by the Milky Way and can only once a year on the seventh day of the seventh lunar month of the lunisolar calendar.

The festival is held in August, but the date varies in each city, and so do the traditions. In Osaka it is common to see rivers filled with blue light bulbs at night, looking like a sea of stars. On commonality between all Tanaba festivities though is a decoration competition!

You’ll find many surprises if you take the time to explore the shopping arcades and wander the cities during the festivities. 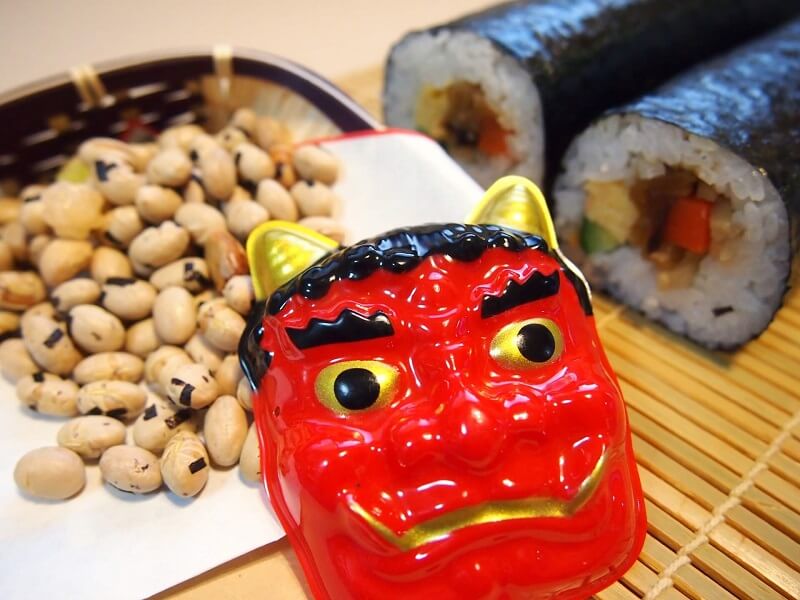 I want to conclude this list with Setsubun (setsu, season, and bun, separation), the celebration of Spring. The festival is actually often held in early February, and that’s because the date is based on the old Japanese calendar. The day after Setsubun is called Risshun (立春), with the Kanjis of standing and Spring = standing in Spring. Kanji wizardry right here.

The most famous tradition of this event is mamemaki (豆撒き, bean scattering). It’s a local event held by each household. The family will will take roasted soybeans known as fukumame (福豆, literally, fortune beans) and either throw them out of the front door, or at a member of the family wearing an oni (demon) mask while shouting "Devils out! Fortune in!" (Oni wa soto! Fuku wa uchi! (鬼は外! 福は内!)), before slamming the door. 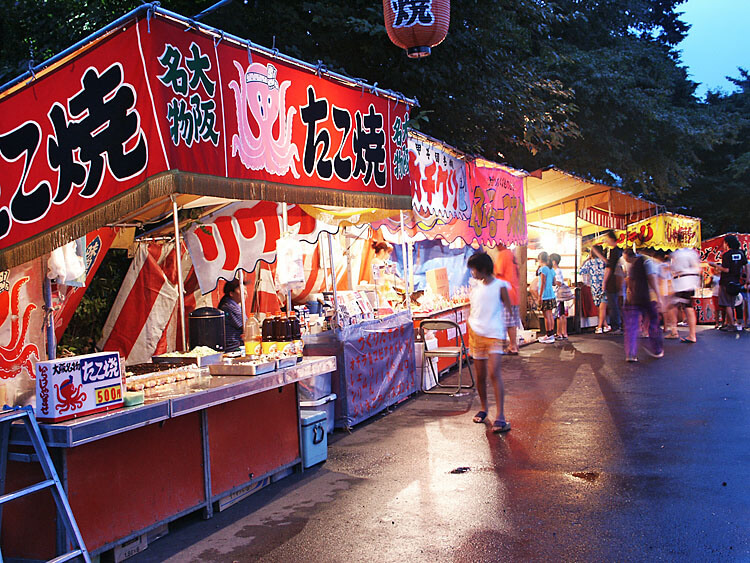 I know, I made you wait long enough. So here we are, for those of you who have the munchies, I made a list of the things you HAVE to try on your next Japanese Festival visit!

If you are interested in learning more about Japan’s summer festival, head over to read more here.

The list of festivals in Japan is long, very long. I’ve only mentioned some of the most famous, carrying carry the most importance from a cultural point of view. But, you’ll be familiar with 花見, hanami, the sakura blossom viewing festival, or 正月, shōgatsu, the New Year traditional celebrations with their tasty kaiseki meals.

There are also more contemporary pop culture festivals, such as the national Pocky day, ポッキーの日, where the famous snack that everyone in this country has eaten at least half a dozen times is honored.

No matter when you come to visit, there’ll be something for you to experience, but make sure to check the dates ahead as they change every year, especially if you’re interested in a specific event!

In the meantime, ZenPop’s got you covered with some of the best festival flavors in our Ramen, Mix, or Sweets packs! Make sure to check them out.