What is Obon? Japan's festival for the dead.

Obon or O bon (お盆) is one of the most popular traditional Japanese holidays. Halfway between commemoration and celebration, it is an occasion for family reunions, but also a vacation observed throughout the archipelago, along with New Year's Day and Golden Week.

These four days are also the occasion of festivals and rituals typical of the Japanese culture: bon odori, tôro nagashi, etc. They are as much appreciated for their festive side as for their ritual side.

Where does the Obon festival come from? The origins of O bon go back to the religious festivals of India and China commemorating the dead, marked by the appearance of ghosts and spirits.
It is therefore not surprising that the ritual was adopted by the aristocracy of Heian and Nara, gradually becoming part of the already popular celebrations of the dead, with Central Asia already having a strong influence on the court.

The roots of O bon are to be found more precisely in the story of Maha Maudgalyayana. He was a disciple of the Buddha who, thanks to his divination skills, saw his mother languishing in the realm of hungry ghosts (one of the reincarnation worlds of Buddhism).

To rescue her, Buddha is said to have asked her to make offerings on the 15thᵉ day of the 7thᵉ month to the monks returning from their summer retreat and requesting their help through their prayers. Once this act was performed, her mother was released and Maha Maudgalyana is said to have then danced in happiness. It is this dance that is the source of the O bon festival and its symbolism: the bon odori (盆踊り).

What is the Japanese Obon Festival?

Although its history is older, O bon has been practiced and celebrated in a festive manner for about five hundred years among all strata of the Japanese population. Nowadays, O bon is an occasion for Japanese families to return to their native land and witness the return of their ancestors.

The importance of the festival is such that Japanese companies often grant their employees special vacations or leaves to participate in this very important event. The weekends can be combined with the O bon vacations for example, or with the mountain day, August 11th, which is also a holiday!

For the inhabitants of the neighborhoods, as well as for the local life, O bon is also a sign of many preparations (lanterns, kimonos, yukatas), with very notable differences according to the regions. Three regions are also particularly famous for their original festival practice. It is impossible not to mention the most important bon odori in Japan. Nearly a million visitors flock to Tokushima to watch and participate in the huge parades in the streets of the city. Such a success that the district of Koenji in Tokyo now organizes its own awa odori at the end of August! Born during the Edo period, about 400 years ago, it is the longest festival in Japan! Its dances are held from July to September, with their peak during the period from August 13 to 16. Recognized as an intangible asset, people come from all over the country to watch the dancers. They sometimes have no rest and dance from dusk to dawn! With a history of nearly 700 years, this festival lasts from August 16 to 18. Its famous "dance with the spirits of the dead", in which the participants cover themselves with a black hood, makes the originality of the parades which take place there. The mysterious and melancholic music that punctuates this festival also makes it very popular. It is one of the three major O bon in Japan.

What are the rituals of the Obon?

While a distinction must be made between rituals that take place within the family compound and those that occur in public, the rituals and practices that take place during O bon are generally the following: 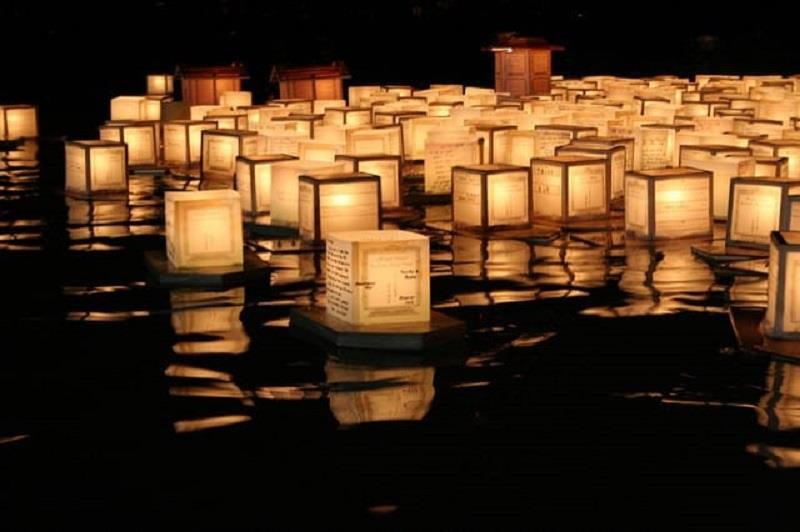 Depending on the region, this ceremony can be observed in several variations. The symbol of the lanterns, floating at night, is one of the Asian epinal images. They symbolize the return of the ancestors to the heavens.

During the last day of O bon, they are placed on the water, from which the human being would be born, if we believe the ancient legends. The largest gatherings of lanterns are held in Hiroshima and Nagasaki, in commemoration of the infamous bombings of the Second World War.

This dance is expressed differently whether one is in Kanto or Kansai. The dancers, professional or amateur, dressed in kimonos, parade in the streets and in the precincts of temples and sanctuaries to the rhythm of Japanese drums, the taikos.

Historically, the dance was intended to celebrate the dead who had escaped the sufferings of the underworld. Nowadays, it is also an opportunity to show solidarity with one's neighborhood and to meet one's community. This is certainly the highlight of Obon. The Mukaebi is a fire that is lit in the forest on the evening of August 13, but nowadays it is also done near homes. The flickering flames of various sizes welcome the spirits of the deceased and show them the way. The Mukaebi marks the beginning of the celebrations.

The Okuribi is the fire that guides the departure of the ancestors from the earthly world. Initiated at the end of the O bon, often on a mountain slope, the most famous is certainly that of Kyoto, the Gozan no Okuribi. 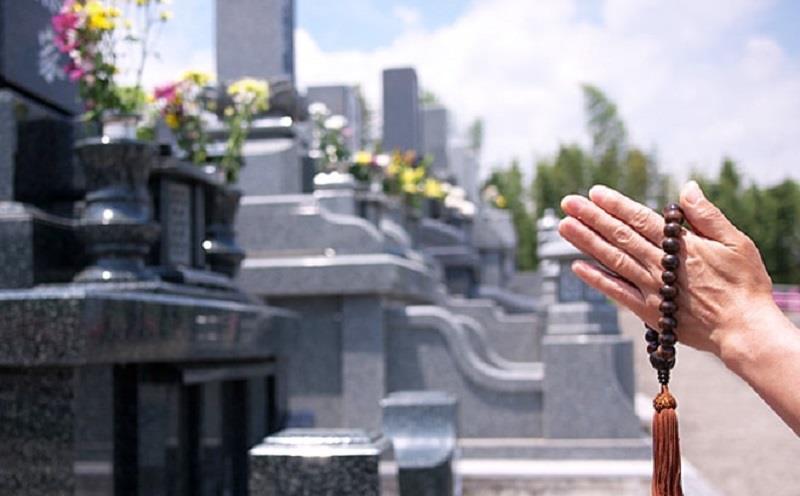 As in the West, in Japan, there are family graves, even if cremation is the norm in the archipelago. It is the place of tributes and one leaves there an offering (alcohol, cakes, flowers, fruits and vegetables, etc.). It is also the occasion to make a big cleaning of it. The first O bon after the death of a loved one is called hatsubon. This is also the occasion for a very specific Buddhist memorial service. A glowing sky, kimonos running through the streets to the rhythm of wooden sandals, the Geta is also that O good: a celebration that offers the most beautiful fireworks of the year.

What do we eat during Obon? Like many other national holidays, such as New Year and its famous "osechi ryōri (御節料理)", during O bon, many different dishes are served: takoyaki, ohagi, dango, okonomiyaki, kakigori, etc. Many come from the many stalls roaming the streets during the festival, the yatai.
Even if the tradition is not systematic, there are also many Japanese people eating vegetarian food throughout the festival period.

What are the dates of Obon? O bon has not always been celebrated on the same dates. In the past, the lunar calendar was of great importance in setting the date, but with the introduction of the Gregorian calendar, the schedule for this tradition had to be reorganized. Indeed, celebrating O bon in July posed multiple logistical and technical concerns, the most important of which was the management of agricultural production, decisive during the month of July.

So, if the majority of the country observes Obon from August 13th to 16th (hachigatsu bon), some areas within Tokyo, in the Tohoku region but also on the Amami island continue to celebrate it in July (shichigatsu bon or kyu bon).

Beware, not insignificant fact in Japan, banks to take vacations are legion during O bon! It is therefore important to check the closing dates of the bank branches as there is a risk of running out of cash for a few days. It is the same for many trades, but also for highways which are crowded at the departure and at the return!