Behind-the-Scenes with the Artist of ZenPop's Manga

This month ZenPop’s original online manga Full Moon Magic is turning one! Thank you to all those of you who have followed Luna’s adventures on Instagram or Facebook so far.

As many of you wanted to know more about the process of the creation of Full Moon Magic, we sat for an interview with the artist. But first, here is an overview of the main character’s origin.

Now that you know the background, let’s introduce the artist who draws the manga!

*Read until the end to find out about our Anniversary Giveaway and a chance to be featured in the manga.*

Meet the artist behind Luna-chan

The artist is a young Japanese woman, born and raised in Osaka, where she currently lives. Her pen name is Sarashina Shizuku（更科 雫). Here is a self-portrait. 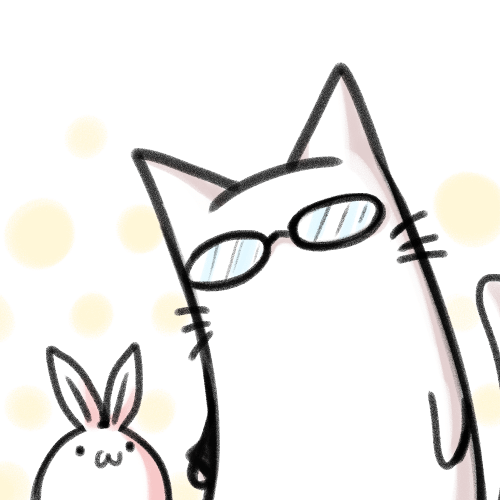 Yes, that’s her on the right! You can tell that she is a bit shy to reveal her face, but that she wears glasses and loves cats.

1. Do you have any hobbies besides drawing?

My hobbies besides drawing are playing games, dolls, handicrafts, and visiting shrines. I love visiting shrines, and I even have a certificate of passing certain grades of the shrine exam.

2. What is your favorite food?

3. What do you enjoy most about living in Japan?

I enjoy each season and their transitions to the next one. I often go to hanami and autumn-leaf-viewing.

4. Did you always want to be a manga artist?

Yes, I always wanted to work in the art field and become a manga artist since my childhood. I think I was around 10 years old when I decided to become one.

5. Where did you study to draw so cute? (question from a reader)

I went to an art school in Osaka that specialises in manga, but my style is self-taught. I would always try to copy any cute drawings I saw, and draw things I see. That’s mainly how I learned.

6. Are you a full time manga artist now?

At the moment, I mostly do illustrations, but I sometimes have a part-time job too, so I can’t be called a full-time manga artist. Recently, I drew illustrations for a book.

7. Do you love Osamu Tezuka? (question from a reader)

I like “Phoenix” and “Black Jack” a lot! I have been to the Tezuka Osamu Museum in Takarazuka city several times.

8. What is your favorite manga?

9. Where do you find your inspiration? Do you often go on field trips for your references? (question from a reader)

When I can afford the time and cost, I love going on trips. Nara and Kyoto are pretty close from Osaka so I often go there for one day to find inspiration. I also enjoy getting fresh inspirations by visiting museums, and hanging out with my friends.

I draw rough sketches and drafts with my tablet PC device in my room or when I’m on a train. Then, I download my sketches to my computer, where I finish the illustration. 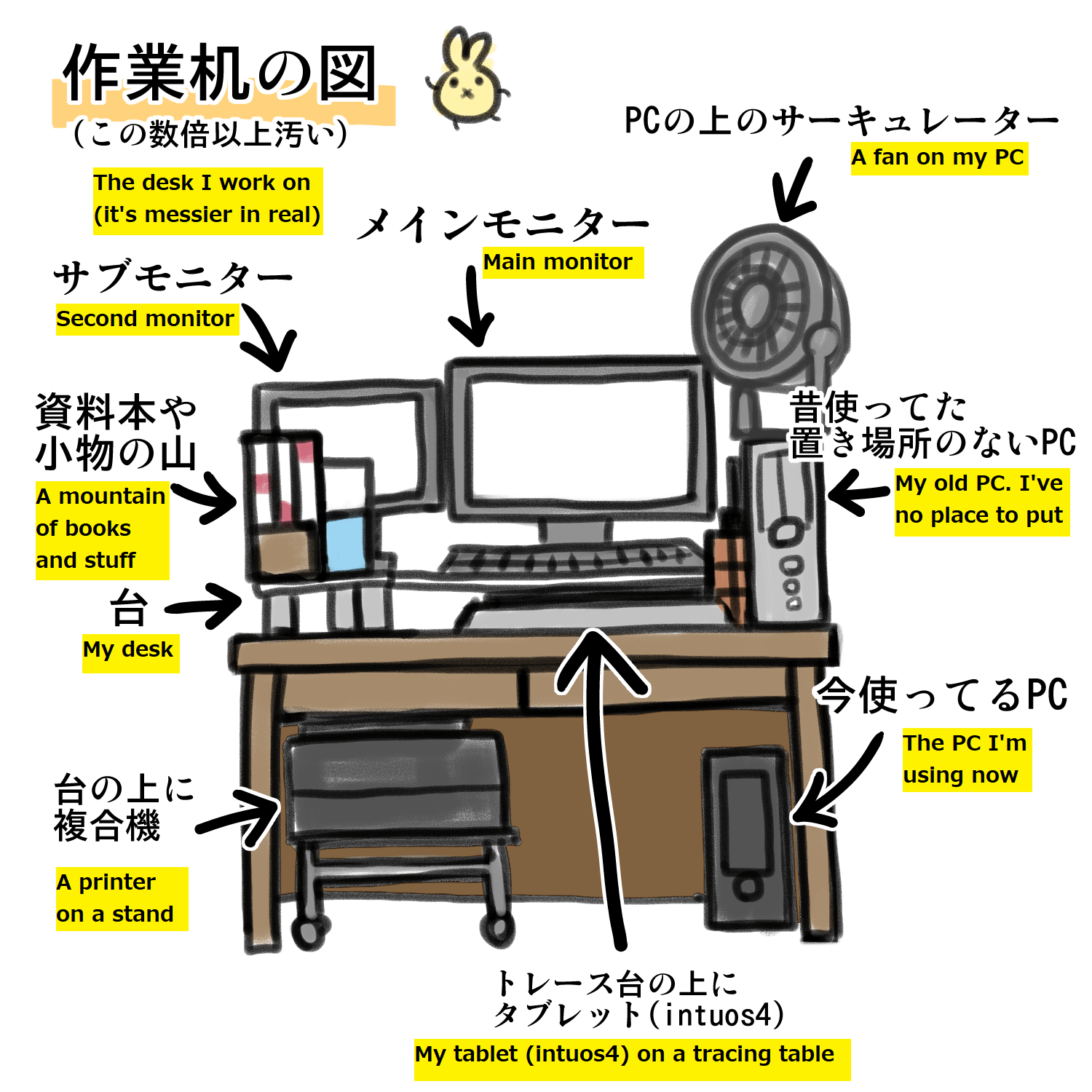 As I mentioned, I draw rough sketches with my tablet PC and then work on the rest on my desktop PC. Occasionally I only use my desktop PC for the entire process. I use a software called “IllustStudio” (previous version of Clip Studio) which is no longer sold in the market anymore. The tablet I use is intuos4 from Wacom.

12. How long does it take to complete one frame for Full Moon Magic? (question from a reader)

Drawing Luna only takes about two hours from scratch. If I’m drawing more complicated scenes with other characters and backgrounds, it takes a lot longer than that. 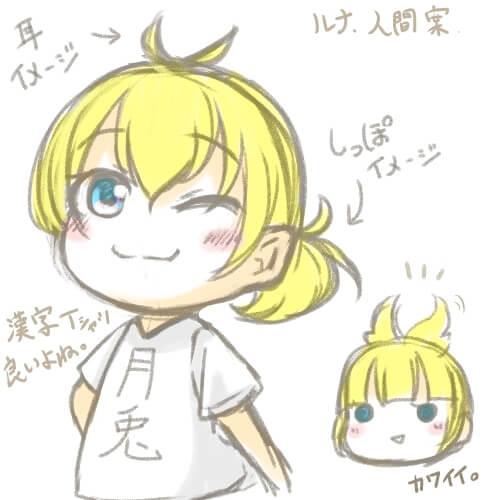 13. We heard that artists tend to concentrate better during the night, is it true?

Yes, that applies to me too! After finishing other things, I start drawing manga around 10pm or so until early in the morning.

14. What was the hardest drawing the ZenPop team asked for until now?

It was hard at the beginning of the manga. I remember that it took me a while to decide how to draw the features of each character and get used to it.

Sketches from the beginning, when Shin takes Luna home after he found her freezing in the rain alone.

15. Do you personally prefer Luna as a bunny or as a human?

I prefer the bunny version of Luna, because it is easier for me to draw (lol). For example, it's easier to draw a hengao (strange face) on a bunny Luna.

16. Beside Luna, who is your favorite character?

Since I love animals, Riku-kun, the dog would be my favorite.

17. What other projects are you currently working on?

I’m drawing on illustrations for a PBW browser game. I also draw on a personal 4-panels manga and I have a blog but I don’t update it often. This is the link to my PBW page.

18. Do you have a fun story you could share with us, like a ghost story? (question from a reader)

I have no sixth sense at all so nothing like this happened to me in my life. I may not be sensitive enough (lol).

19. What are your tips for someone wanting to become an artist?

Be passionate and experience anything you can (literally “experience is the gold”). Once you start drawing a manga, try to finish it. Even if you think your manga is not funny as the story moves forward, don’t give up. I am telling the same to myself right now.

20. If you don’t mind, could you share one of your personal drawings with us?

This is something I just drew for fun, but let me share it with you. It’s from the time that I created an original character called Piyo (a sort of chicken that can speak) and drew fairy tales.

ZenPop: Thank you for taking the time to reply to our questions! We're excited to keep Luna's story going this year!

Following our manga's 1st anniversary, we will celebrate ZenPop's 3rd anniversary in October. Every week of the month, ZenPop subscribers will have the chance to win an awesome prize! The last week, the prize is the chance to be drawn by Sarashina Shizuku (in her style) into one panel of the manga! Don't miss this chance, you could be sitting next to Luna! See example below. 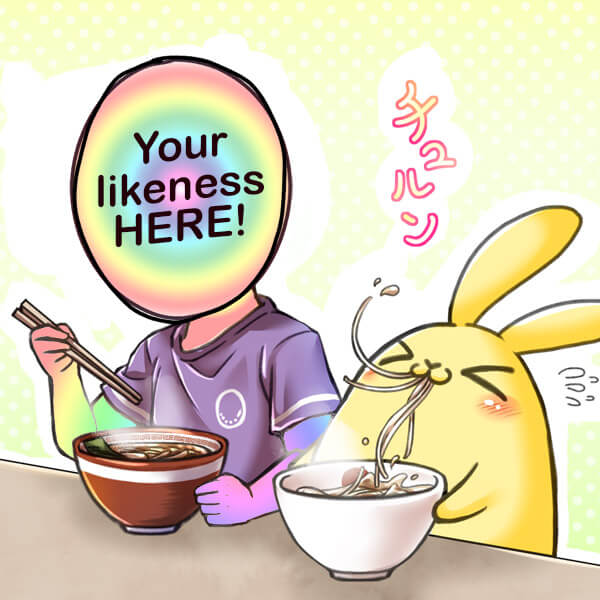 Find out more about our 3rd Anniversary Giveaway

In the coming story, Luna who has gone to a matsuri (summer festival) together with Shin and gets lost in a Obakeyashiki (ghost house). I wonder what her reaction will be...will she be able to turn human again? Stay tuned!

Follow Luna and Full Moon Magic to keep up to date with the latest art!

Part 1: The Legend of the Moon